Villagers in Kalasin have been warned to brace for overflow from the Chi River as the water level continues to rise. (Photo by Yongyuth Phuphuangphet)

NORTHEAST – More than 1,000 rai of farmland in Nakhon Phanom has been flooded and people in Kalasin have been warned to brace for overflow from the Chi River after the region was pounded by heavy rain over the past week.

In Nakhon Phanom, assistance is being given to farmers in several districts whose rice fields were inundated by overflow from tributaries of the Mekong River.

Provincial governor Somchai Witthayadamrong said communities in other districts along the Mekong River had also been warned to prepare for flooding after the river level rose to 10 metres, only 3m below the critical level.

Mr Somchai said the river level was increasing by 50 centimetres per day. Villagers were advised to move their belongings to higher ground as the river could burst its banks if there was more more heavy rain. (continues below) 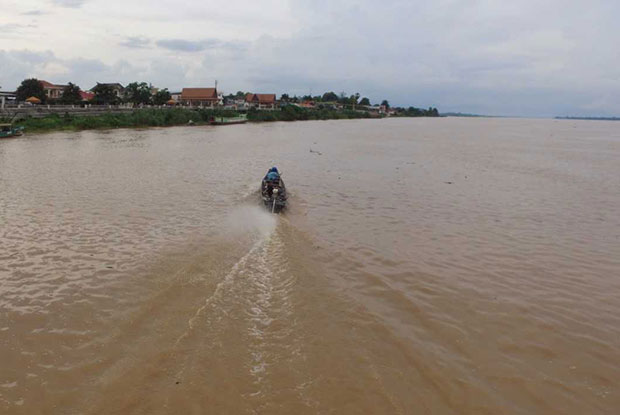 The water level in the Mekong River has risen to 10 metres,  only 3m shy of the critical level after days of heavy rain. (Photo by Phatthanapong Sripiachai)

In Kalasin, 18 districts were warned that the Chi River could overflow. The river rose by 29 centimetres. Kamalasai, Khong Chai Phatthana and Rong Kham districts were most at risk.

Wichan Thaenhin, chief of the Kalasin Disaster Prevention and Mitigation Office, said the river had risen rapidly following consecutive days of rainfall in the province. It was also receiving inflow from watercourses in neigbouring provinces of Khon Kaen and Maha Sarakham.

The Royal Irrigation Department cut the rate of discharged from the Chao Phraya dam in Chai Nat to 1,038 cubic metres per second on Friday to lower flood levels that had inundated nearly 10,000 households in Ayutthaya.

According to Udomsak Khaonuna, chief of the Ayutthaya Disaster Prevention and Mitigation Office, a total of 9,940 households in 69 tambons of six districts were affected by flood waters.

Villagers were also warned of post-flooding contagious diseases including leptospirosis.

Mr Udomsak said authorities will remain vigilant. The northern region had also been pounded by heavy rain which could trigger flash floods in Central Plains provinces.