The police request for the extradition of Red Bull scion Vorayuth "Boss" Yoovidhya has been translated and should reach public prosecutors soon, the Bangkok police chief said on Friday.

If the national police chief signed his name in the paper, it would be sent to the Office of the Attorney-General, which would proceed with the extradition attempt for Mr Vorayuth, he said.

The destination country had an extradition agreement with Thailand, Pol Lt Gen Sanit said. He would not name the country. He admitted that process might be slow.

A source said the police Foreign Affairs Division would check the translated document before proposing it to the national police chief for signing. The process could take a few days.

On Tuesday Pol Lt Gen Sanit said that the Foreign Affairs Division had not translated the 33-page extradition request. He ordered that a certified private translation service be used for the job.

The outsourced translation was sought after a senior public prosecutor said the police had still not sent the extradition request to the Office of the Attorney-General.

Before dawn on Sept 3, 2012, a black Ferrari allegedly driven by Mr Vorayuth, now 31, slammed into the rear of a motorcycle ridden by 47-year-old Pol Snr Sgt Maj Wichian Klanprasert of Thong Lor police station. His mangled body was dragged along Sukhumvit Road before the vehicle sped away.

Mr Vorayuth has delayed hearing the charges seven times, citing various reasons. It was not until April 27 this year that prosecutors finally charged him with reckless driving causing death and failing to help a crash victim.

A speeding charge was dropped as its one-year statute of limitations had expired.

His passport was cancelled and an arrest warrant was issued for him after he flew out of Thailand on his private plane two days before he was due to report to answer the charges.

He was seen leaving a residence in London in April. 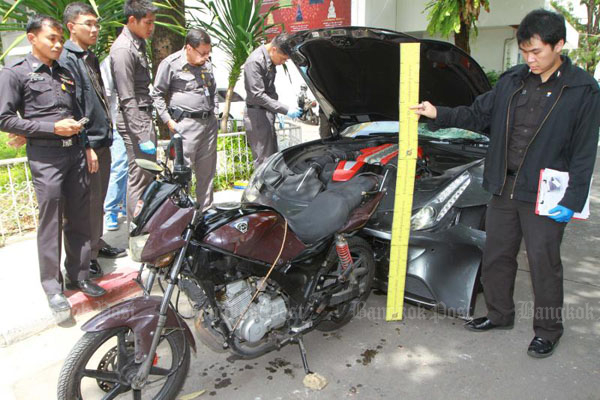 Forensic police inspect the motorcycle ridden by Pol Snr Sgt Maj Wichian Klanprasert of Thong Lor police station, matching it against the damage to a Ferrari owned by Mr Vorayuth, following the accident, on Sept 4, 2012. (File photo by Somchai Poomlard)