Prime Minister Prayut Chan-o-cha and his wife Naraporn offer alms to monks at the Royal Plaza in a ceremony marking the birthday of Majesty the King Maha Vajiralongkorn Bodindradebayavarangkun. (Photo by Chanat Katanyu)

Merit-making ceremonies and other special events took place in every province, as Thai people celebrated the birthday of His Majesty the King Maha Vajiralongkorn Bodindradebayavarangkun on Friday.

The King turns 65 on Friday.

Prime Minister Prayut Chan-o-cha led his cabinet members, government officials and their spouses in giving alms to 651 monks at the Royal Plaza.

Similar ceremonies were held at other government agencies, provincial halls and district offices attended by officials and residents on this special day. The number of monks invited to offer alms varied from 65 to more than 100.

Nakhon Ratchasima was one of the places outside Bangkok where people flocked to pay their respects. About 3,000 residents gathered at the Thao Suranaree Plaza in the city centre to give alms to 165 monks. Yala, one of the southernmost provinces, saw at least 500 people taking part in celebrations at the provincial hall.

Officials in Chiang Mai province donated blood at hospitals to mark the event. In Phangnga and other provinces, well-wishers released fish and planted trees for the King.

Thailand Post used the occasion to introduce the first postage stamp of His Majesty. The commemorative stamp, embossed with gold foil, is sold at all post offices nationwide starting Friday. 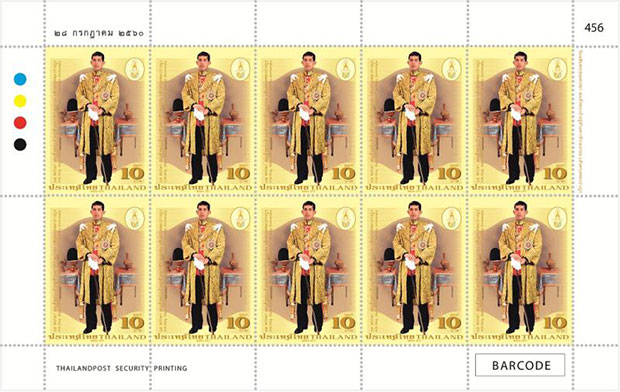