Technicians and experts inspect the flooded Sakon Nakhon airport on Friday for damage to the electric power system and other infrastructure. (Photo by the Department of Airports)

Tropical depression "Sonca" has lashed Sakon Nakhon, leading to the worst floods in the northeastern province for two decades.

The wrath of the storm forced the shutdown of the provincial airport, the evacuation of a hotel and a major breach at a reservoir.

Major floods resulted after torrential downpours pounded 16 provinces mainly in the Northeast, the lower North and the Central region yesterday.

Sakon Nakhon governor Witthaya Chanchalong called the flooding in the province the worst in 20 years, and said the crisis was exacerbated by runoff from Phu Phan mountain.

The worst-hit area was Muang district as it is located in a low-lying area, and several villages were cut off from the outside world, he said.

The water level in the district yesterday stood at one metre and was still rising at press time last night.

Residents from at least 70 households in the district were evacuated from the flood-ravaged area. Officials expected to move more residents out if the rain continues. Three relief centres to help flood-affected victims were also set up near the city hall.

Sakon Nakhon airport was forced to close after its runway was submerged yesterday afternoon, with all flights cancelled. 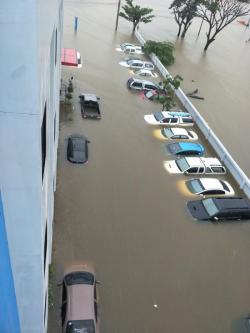 Many cars are submerged in a flooded parking lot at the Hop Inn Hotel in Muang district of Sakon Nakhon. About 70 people had to be evacuated from the hotel as the water level continued to rise at night. (Photo from Surapat Akarasutawong's Facebook page)

Airports Department director-general Darun Saengchai said the water level on the runway was about 40cm high and deemed too dangerous for aircraft. The department will assess the situation day by day before reopening the airport, he added.

Airport officials also helped evacuate 15 passengers who were stranded there.

About 70 people were also evacuated from the Hop Inn budget hotel in Muang district.

Rescue workers were helping stranded people by supplying them with food before bringing them to higher ground. About 100 people were taken to makeshift shelters set up near the provincial hall, according to the provincial office of the Disaster Prevention and Mitigation Department.

In Sakon Nakhon municipality, main roads were under nearly one metre of floodwater triggered by flash floods from Phu Phan mountain.

Huai Sai Khamin reservoir in Muang district was breached, across about 20 metres, as it was unable to hold the large amounts of water, and more than one million cubic metres of water overflowed into nearby areas, said Niphon Mungkornkaew, chief of Sakon Nakhon Irrigation Office 5.

The municipality needs to install water pumps urgently to remove water from roads.

The flooding was also caused by overflow from Nong Han, the largest freshwater lake in the Northeast, which was unable to hold the huge volume of water caused by the persistent rain.

The discharged water also caused land slips along the riverbank while a number of rice paddy fields in Muang and Khok Si Suphan districts were inundated by floodwater.

According to the Department of Disaster Prevention and Mitigation (DDPM), 16 provinces nationwide have been ravaged by flooding.

The department warned people in the North, the Northeast, the East and the Central Plains to brace for further heavy rainfall until tomorrow, which could trigger more flash floods and landslides.

In Sukhothai, overflow from the Yom River broke through a wall of large sandbags to hit business areas in Muang Sukhothai municipality which was under 20-30cm of floodwater while at Sukhothai fresh market the water level stood at 50cm yesterday.

In Nakhon Ratchasima, 229 villages in five districts were ravaged by floodwater. The five districts are Thepharak, Prathai, Sida, Bua Lai and Non Daeng.

About 40,000 rai of agricultural land was also devastated by floods yesterday in 10 districts of Roi Et.

Sorawut Panwat, chief of the provincial Disaster Prevention and Mitigation Office, said the flooding was caused by heavy rain and overflow from rivers and canals in the province.

Meanwhile, in Kalasin, more than 25,000 rai of farmland was inundated by floodwater while 35 roads in 14 districts were cut off, according to the Kalasin Disaster Prevention and Mitigation Office.