Tsunami alert system 80% out of order

Public mistrust cited as one of key issues

Up to 80% of tsunami and disaster warning system equipment nationwide is now out of order, warns the deputy director-general of the Department of Disaster Prevention and Mitigation (DDPM). 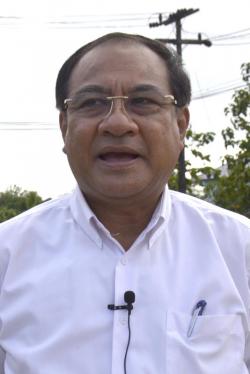 Kobchai: Time will be needed for repairs

The department aims to fix all of the equipment in the six Andaman coastal provinces by the end of October, said deputy director-general Kobchai Boonyaorana.

Mr Kobchai said part of the delay in the maintenance was due to the transfer period, as the National Disaster Warning Centre was moved from the former ICT Ministry to the DDPM, which is under the Interior Ministry. The transfer was completed in November 2016.

He said the budget has been allocated to the department, and it will work to repair the system and maintain the equipment on the basis of priorities.

Apart from the warning system in the six provinces, mainly focused on tsunamis, there are also disaster warning systems in other parts of the country, focusing on different kinds of disasters, said Mr Kobchai.

"We've got the budget already but repairs will take time, as some parts must be imported," he said.

Meanwhile, Mr Kobchai said the department will use other channels to alert the public, including television and radio, sending information to authorities at provincial, district and local levels. Line and SMS notifications will also be used, he said.

On the community level, local authorities would have to use every means to alert the public including radio, hand-held speakers, whistles and trucks equipped with loudspeakers, he said.

He said the first key to effective warning is the evaluation of the risks and the time available before the areas will be hit.

"Once an earthquake happens, we take around 10 minutes to analyse the information, and it can take up to 20-30 minutes to make sure if there is a high chance of a tsunami," said Mr Kobchai.

Another factor is local people's trust in the warning system. They also need regular drills, he said.

"We asked victims of recent flooding, whose damage was severe, whether they received warnings from authorities, and they said they didn't, thinking the flooding wouldn't come so fast," said Mr Kobchai, adding that had contributed to doubts regarding the system.

Maitree Jongkraijug, a leader of a community-based disaster risk management team in tsunami-hit Ban Nam Khem in Phangnga, said although the community are alert and ready to cooperate, effective collaboration is still needed between the department and local authorities.

The community recently opened a shelter tower that was built over a decade ago. Property rights issues prevented it being opened earlier.