The main street is almost passable in Sakon Nakhon town but the Sonca storm runoff is slow because of a lack of drainage. (Post Today photo)

A lack of waterways sufficiently big enough to drain overflow, man-made barriers and unusually heavy rainfall are being blamed for the disastrous flood which has beset Sakon Nakhon.

Sakon Nakhon is slowly recovering with water levels subsiding in most areas and the province's airport is set to reopen Tuesday. Authorities expect to drain overflow from hard-hit areas in the province in two weeks.

The Department of Disaster Prevention and Mitigation (DDPM) said it will take about 10 days to drain all the water out from Sakon Nakhon through the Nong Harn Lake, which is the province's main water catchment area. From there, the water will flow into the Kam River and continue 120km downstream before ending up in the Mekong River.

However, the overflow in the reservoir and canal and the high levels in the Mekong River have slowed down the water release from Sakon Nakhon, according to local authorities.

Water is gradually receding in the municipal downtown section of Muang district in Sakon Nakhon after being inundated for several days by the worst flooding in more than four decades, according to Prasart Tongsiri, a prominent local businessman.

Mr Prasart described the economic loss from the flood in the downtown area of Sakon Nakhon as staggering, estimated to be hundreds of millions of baht.

The last major flood to devastate the city was back in 1974. However, the water then was not as high and damage not as widespread.

It has been reported that flood water in the hard-hit municipality was recorded at 1.5 metres at its deepest point. 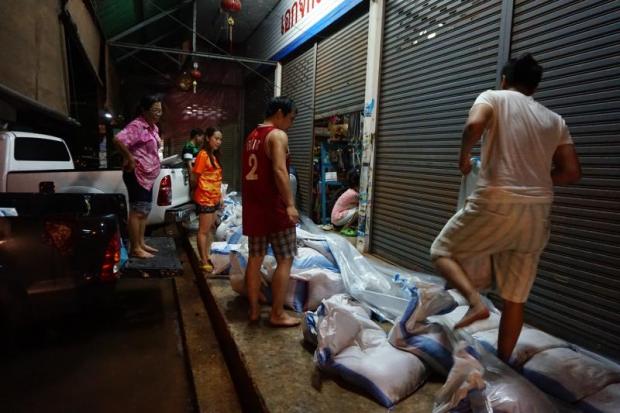 Sakon Nakhon residents stack sandbags to secure their shop from rising floodwater at a market in Na Kae district of Nakhon Phanom Monday. The area is being inundated by water from the heavily flooded Muang district.  (Photo by Pattanapong Sripiachai)

Mr Prasart said the heavy damage was caused by the flood battering the province's economic heartland.

"The water came very fast and we couldn't handle it," he said, adding the anti-flood measures were poor and the country as a whole was ill-prepared for disasters of such magnitude.

Many local shops, including those selling electrical appliances, were brought to their knees. Warehouses storing supplies were flooded, leaving behind piles of wrecked merchandise.

"We've lost everything. We had only three hours to move the products from the shop. In the end, we had to let it all go," said the owner of an electrical appliance shop.

Thongplew Kongjun, deputy chief of the Department of Royal Irrigation, admitted there were three main factors behind the flooding.

First, the unusually heavy rainfall, which set a 50-year record at 465 millimetres in three days over the Phu Phan mountain, caused a massive volume of water of at least 250 million cubic metres to rush down from the mountain and overwhelm Nong Harn Lake.

Second, the Kam River is the only water course to drain any overflow from the Muang district to the Mekong River.

As in other provinces, there are many man-made barriers, particularly constructions, that block water flow.

"We have a few days left for water management before the next round of rainfall. It is expected to take around two weeks before we can completely drain the water out from Nong Harn Lake to the Mekong River," Mr Thongplew said.

These highways have been set higher than the surrounding communities to keep traffic flowing during floods, but these have in turn been obstructing water flow, he said.

He also agreed that city expansion, especially into wetlands, and waterway reclamation partly contributed to the current flood.

Poor city planning is also a factor, he added. Many parts of waterways in the city have been illegally covered.

He also cited a case about 30 years ago when an owner of a factory, in his neighbourhood, illegally covered a part of Huay Sai for personal use.

DDPM chief Chatchai Promlert maintained the province was warned about the looming storm five days in advance. He explained the department issued its first warning on July 23 and repeated it five times until last Thursday when heavy rain started lashing Sakon Nakhon.

Prime Minister Prayut Chan-o-cha is due to arrive in Sakon Nakhon tomorrow to inspect flooded areas and visit residents.