Line Thailand is jumping on the mobile-taxi-booking bandwagon by expanding the services offered by its on-demand delivery app Line Man, adding cabs to its current list that includes food, groceries, documents and parcels.

The service -- which will pit Line against the likes of GrabTaxi, Uber and Easy Taxi -- is scheduled to launch by the end of this year with at least 20,000 taxi drivers, the company said.

"It can also solve pain points for passengers, such as being rejected by drivers or having to wait for long time [for a cab]," he said.

Line Man was initiated by a Thai team, and the upcoming Line Taxi service app will also be designed "by Thais for Thais", Mr Ariya said.

Line Man was designed to bridge the digital divide by encouraging Thailand's 44 million internet users to use more offline services ranging from restaurants and grocery deliveries to transport.

Line is partnering with the Bangkok Taxi Cooperative Network, which has 60,000 taxi drivers on its platform, accounting for 60% of all registered cabbies in Bangkok. 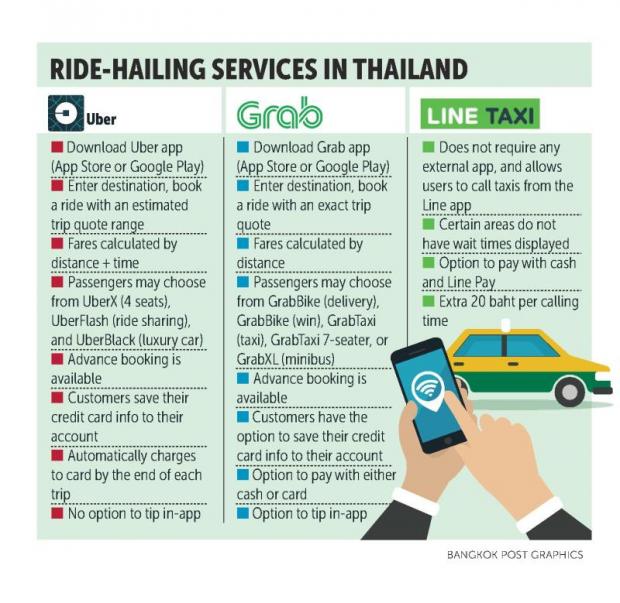 The company expects to have 20,000 drivers on the books when operations go full throttle later this year, he said.

"The service fare is similar to that of a normal taxi, plus an additional 20 baht for the calling service fee," Mr Vitoon said. "Line will split revenue evenly with taxi drivers, but I believe it will ditch this revenue-sharing model within the first year."

The beta version of the application has been designed for ease of use and in such a way that it can easily integrate with Line Pay, the company said.

"Taxi drivers who use other mobile apps may have to wait three or four days to get paid if passengers don't use cash", but Line Taxi drivers can withdraw the money instantly from an ATM, Mr Vitoon said.

The cooperative previously developed its own taxi booking app but abandoned the plan in favour of teaming up with Line, crediting the latter's strong user base, platform, technology and support team, he said.

"We'll help Line to screen cars and drivers. A strong driver network will also reduce the rate of passenger rejections," Mr Vittoon said. "We'll show taxis within a one-kilometre radius. If no cab accepts the fare, the system will expand coverage to a wider area."

Within two years all newly registered cabs will use Line Taxi, Mr Vittoon said, adding that total drivers could hit 70,000.