While most airlines frown on operating at two airports close to each other for cost and efficiency reasons, and to avoid confusing passengers, Scoot thinks otherwise. 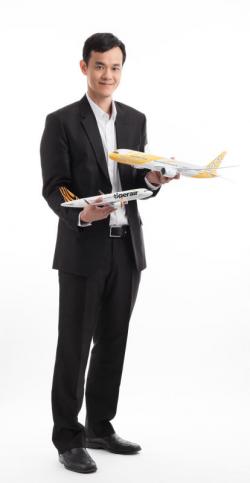 Mr Lee says Suvarnabhumi and Don Mueang airports each has its individual demand.

The Singaporean low-cost carrier will continue to operate flights from Bangkok's two airports even though Tigerair has come under its wing and is providing opportunities for operation consolidation.

Scoot chief executive Lee Lik Hsin told the Bangkok Post that the airline still chooses to operate from Suvarnabhumi and Don Mueang airports as each has its individual demand.

"Don Mueang and Suvarnabhumi will be operating as per the current arrangement. Scoot does not have any immediate plans to move towards one airport [in Bangkok]," he said.

Prior to the merger, Tigerair operated short-haul flights from Suvarnabhumi airport with Airbus A320 single-aisle jets, while medium-to-long-haul operator Scoot used Don Mueang as its Thai base with Boeing 787 Dreamliner wide-body aircraft.

That arrangement has not been changed as a result of integration which was finalised on July 25 and saw Tigerair's name plate erased and replaced by Scoot.

Scoot's operations from Don Mueang is greater than at Suvarnabhumi as Don Mueang is home to its two Thai associate carriers, NokScoot and Nok Air.

Scoot is a joint venture partner in NokScoot which flies medium-to-long-haul flights, while it has alliance arrangement with SET-listed Nok Air, whose major operations is for the Thai domestic network.

Post-integration is not triggering any change in Scoot's operations in Thailand, like ramping up frequencies or introducing additional ports of call in the country any time soon.

"We will continue to monitor demand on these routes and make an announcement at an appropriate time should we change frequency."

Asked whether Scoot would be interested in taking a stake in Nok Air, which is seeking capital injection as part of its business turnaround plan, Mr Lee said Scoot is not planning doing so.

"We have just completed the merger between Scoot and Tigerair, and will be focusing on Scoot's growth at this point."

He declined to say if Scoot would work with NokScoot to enable the latter to expedite a growth plan that has stalled over the past two years as a result of the red flag slapped on it by the International Civil Aviation Organization over the country's aviation safety shortcomings.

But he said NokScoot, 49% owned by Scoot, is committed to the promotion of aviation safety standards to push forward for the removal of the red flag.

"NokScoot has been doing its best to cooperate with the CAAT [Civil Aviation Authority of Thailand] and is confident the issue can be resolved within this year," Mr Lee said.

Asked whether there were still any benefits left from the Tigerair brand that could still be useful, he said: "Tigerair built a strong market presence in the Southeast Asia region, and we'll tap into this strong foundation to continue raising Scoot's presence in Thailand."

Scoot marked the Scoot-Tigerair merger by announcing five new destinations the airline will be calling at by June next year.

Two of them are Honolulu, Scoot's maiden US destination, and Harbin in northeast China, the launch of which is expected towards this year's end with its B787 Dreamliner fleet.

The remaining three routes are short-haul destinations -- Kuching and Kuantan in Malaysia, and Palembang in Indonesia -- to be served by A320 aircraft.

Scoot's chief commercial officer Leslie Thng hinted that Cambodia and Laos could possibly be the next short-haul destinations for Scoot.