A section of Highway No.401 at kilometre maker 27 between Kapong district of Phangnga and Surat Thani’s Phanom district is cut off following heavy rain overnight. (Photo by Supapong Chaolan)

PHANGNGA/SURAT THANI/PHUKET - Heavy rain pounded two districts of Phangnga and parts of Surat Thani overnight, causing landslides and cutting off a road. A pickup truck fell into a crack, but nobody was injured.

In Phangnga, the badly damaged section of a road to Ao Waek in tambon Bang Wan, Khuru Buri district. made it impassable for all vehicles. One pickup truck fell into the large crack, but nobody was injured. 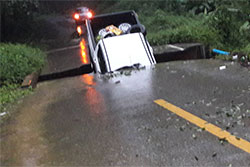 A pickup truck falls into a road crack in Phangnga. Nobody was injured. (Photo by Achadtaya Chuenniran)

Workers and machines were sent to remove the fallen vehicle from the area. Some 34 households were cut off from the outside world after the road leading to their community was damaged, the provincial disaster prevention and mitigation office said on Saturday.

The rain also caused landslides in the Khao Sok national park, which blocked a section of Highway No.401 at kilometre marker 27 in Kapong district, adjacent to Phanom district of Surat Thani.
Phangnga highway authorities on Saturday declared the landslide-hit route in Kapong district off-limits to all vehicles.
Rewat Suedet, head of Khura Buri highway office, said heavy machine and backhoes were deployed to clear the road hit by the landslides. If the rain stops, the route will be opened, he added.
In Surat Thani, Manop Sutthipong, chief of provincial land transport office, said he had asked bus operators on the Krabi-Khao Sok route to avoid Highway No.401.
Buses travelling from Krabi were advised to use Highway No.4118 and then take Road No.401 instead. Those operating on the Surat Thani-Phuket route were also told to avoid Highway No.401, said Mr Manop. 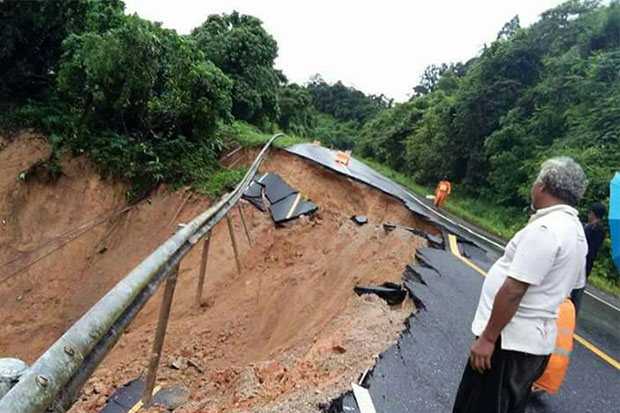 Israel has banned all non-Israelis who have been in Thailand, Singapore, Hong Kong and Macau in the previous 14 days.