Thai nationals will no longer have to fill out departure or arrival cards before passing through immigration counters at Don Mueang and Suvarnabhumi airports from Oct 1, part of a raft of new measures to tackle overcrowding at Bangkok's air gateways.

The measure was rolled out after Prime Minister Prayut Chan-o-cha instructed immigration authorities, the airports and the Transport Ministry earlier in the week to team up in addressing the long queues passengers often face, which can involve waiting hours. 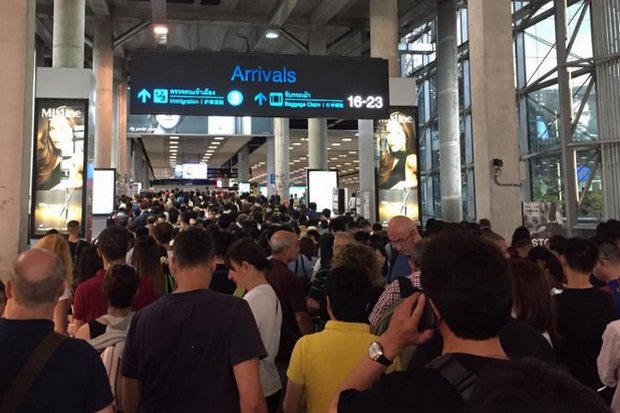 This was the arrivals hall at Suvarnabhumi airport on Wednesday afternoon, photographed by an arriving passenger. The only official response to months of such hours-long queues at Suvarnabhumi and Don Mueang airports came Wednesday when officials announced Thai travellers (only) would no longer have to fill out the TM6 arrival/departure cards. (Photo provided)

The move follows a wave of caustic comments directed at Airports of Thailand (AoT) by exasperated passengers left to endure waits of up to five hours before having their passports stamped at Don Mueang from Friday night to early Saturday morning.

One Thammasat University professor lambasted the airport on behalf of his wife while a foreign woman vented her anger on Twitter calling it "the pit of hell".

A few days later, the airport announced it would install eight new immigration counters this month for departing passengers. The TM.6 form has been required by all travellers since the 1950s and must be produced on arrival and departure at any border crossing point.

Speaking after talks with various agencies at the airport, Pol Lt Gen Nathathorn said Thai passengers would soon be exempt from filling in the time-consuming white cards with blue text, known as the "TM.6".

But foreign travellers are still required to complete the cards, which the Tourism and Sports Ministry and other agencies use to track data on international arrivals. The government said the form will be redesigned.

Interior Minister Anupong Paojinda said Wednesday there was talk of scrapping the form entirely but the Tourism Ministry lobbied for its retention for non-Thais.

Work will also be carried out to enable the use of automated passport control machines for foreign visitors, starting later this month with Singaporean nationals, Pol Lt Gen Nathathorn said.

Don Mueang handles 40,000 passengers a day on average, four times the traffic seen in 2012, he said. This exceeds its passenger handling capacity. It also now sees 55 flights per hour on average, up from 44 just a few years ago, he added.

Last weekend, from late Friday night into early Saturday morning, over 4,000 passengers queued up for immigration checks for periods of up to five hours, according to angry posts on Facebook and other social media.

Officials blamed the fact that 10 delayed flights landed at around 11pm, causing overcapacity. The arrival hall can serve a maximum of 1,000 passengers at any given time, officials said.

Pol Lt Gen Nathathorn said the Immigration Bureau will deploy another 100 officials at Don Mueang, with a further 300 officials to be put in place at Thai airports by year's end. AoT will find additional personnel from outsourcing firms, he added.

The number of immigration counters for arriving passengers will be increased from 21 to 35 within two weeks, he said.

By this time next year, passengers will be checked using biometric equipment, he said. These could include retina or fingerprint scanners.

Pol Lt Gen Nathathorn said Thailand wants to provide more convenience for tourists but is not prepared to compromise on security. Last year the kingdom welcomed 33 million international tourists. Numbers were up 5% in the first half of 2017.