Probably the most obvious North Korean business in Thailand is the string of restaurants owned and managed by Pyongyang - often changing names, staff and location. (Video grab Vice.com)

The government insists it will not take action against North Korean businesses operating in Thailand following reports the United States pressed the country into doing so in a bid to cut the flow of money to Pyongyang.

Prime Minister Prayut Chan-o-cha reiterated Wednesday that Thailand has adhered to all its obligations set out by the United Nations in its resolution on North Korea.

Gen Prayut said the North Korean situation was a global issue and the UN has gone to lengths to force the hermit kingdom to abandon its nuclear weapons, a move his government has endorsed.

The prime minister appeared agitated as he reacted to foreign media reports that US Secretary of State Rex Tillerson urged the government to do more to cut funding streams to North Korea by cracking down on North Korean front companies using Bangkok as a trading hub.

"Do you want to be part of the conflict? We need to take an appropriate stance. We support the UN resolution and denounce [North Korea's actions]," said Gen Prayut.

Reuters quoted Assistant Secretary for East Asian and Pacific Affairs Susan Thornton as saying the US believes North Korean front companies are active in Thailand and is encouraging Thailand to shut them down.

Gen Prayut insisted no new issues were raised during his meeting with Mr Tillerson on Tuesday and said the government would do whatever it could to comply with the resolution.

"Do we have our dignity? We need to keep our dignity. We're abiding by the resolution. Asean has adopted a resolution [against the North Korean nuclear project], so has the UN. We're doing it too," he said.

The prime minister also lashed out at the media for raising the issue.

"Does anyone agree with nuclear weapons? Of course not. If there is something that should be left alone, it should be," he said as a warning to journalists seeking to aggravate sensitive issues.

The new penalties approved unanimously by the UN Security Council aim to cut off roughly one-third of North Korea's estimated US$3 billion (100 billion baht) generated in annual exports, with the aim being to starve Pyongyang of funds so it cannot continue its weapon programmes.

All countries are now banned from importing North Korean coal, iron, lead and seafood products, and from letting in more North Korean labourers, who send remittances back to the country.

Asean has also taken action in urging North Korea to stop its missile and nuclear weapons tests, during its recent meeting in the Philippines.

"We [the government] have not discussed the issues [raised by recent media reports on North Korea]," he said. 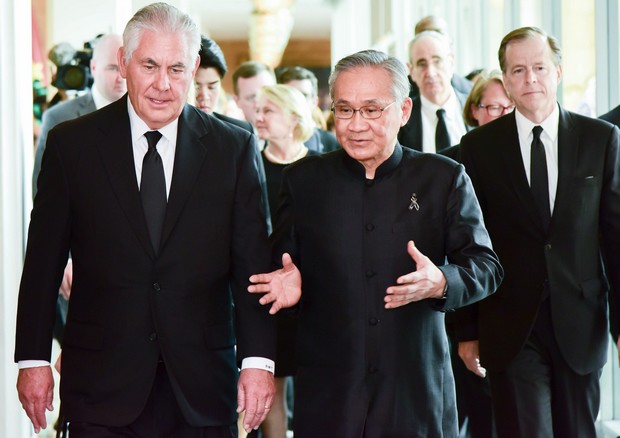 The US Secretary of State spent 45 minutes in private conversation with Foreign Minister Don Pramudwinai. There was no discussion of human rights, and no agreement on North Korea. At right above, US ambassador Glyn T Davies. (Photo courtesy MFA)

According to foreign news agencies quoting Ms Thornton, the US would also lean on Thailand to tighten visa requirements for North Korean visitors and squeeze its diplomatic mission.

Chulalongkorn University political scientist Surachart Bamrungsuk, an expert on international security, said the US' leaning on Thailand is symbolic of its desire to pull Thailand into an alliance against North Korea.

The US is hoping to widen its anti-North Korea camp, he said.

Thailand plays a minor role in geopolitical relations with North Korea, with trade between the two, of which there is no official record, too small to have an impact on either country, he said.

The figure in the first six months of this year was only about US$990,000.

"The US reaction seems to suggest it is putting more importance on the North Korea problem than the human rights issue in Thailand," Prof Surachart said, adding the Thai military government also wants support from the US. However, the government's reaction remains to be seen, just as whether it would have to face more conditions such as to accept more refugees from North Korea.

Wichian Intasi, political scientist from Naresuan University, said Thailand has sovereignty over whether to impose measures other than those in the UN resolution, such as shutting down North Korean restaurants and other businesses.

He also declined to give details about the number of North Korean people detained by immigration authorities for illegal entry, saying the issue is one of national security.

In its Aug 1 report, Reuters said the number of North Koreans slipping illegally into Thailand surged in recent months. In 2016, there were 535 North Korean arrivals in Thailand. However, in the first six months of this year alone there have been 385 arrivals, Reuters reported, citing data from the Immigration Bureau.

Pol Lt Gen Nathathorn pointed out the screening of visitors from North Korea falls under the responsibility of the Foreign Ministry. If they have valid passports and visas, they will be allowed to check though immigration, he said.

According to a Bangkok Post report last year, the number of North Koreans entering Thailand illegally has increased in the past decade.

The current figure is around 2,000 a year, but the number could rise further as a new route via Laos potentially makes entry into Thailand easier, according to Pol Lt Gen Nathathorn.