A police officer inspects the wreckage of the motorcycle the 76-year-old foreigner was riding when hit by a pickup truck in Chon Buri's Sattahip district late on Wednesday. (Rescue volunteer Nantapon Thipsri Facebook's account)

CHON BURI- An elderly foreign man was killed when a pickup truck crashed into his motorcycle near a U-turn in Sattahip district late on Wednesday night.

The pickup driver claimed the motorcyclist cut in front of him.

The crash occurred around 11.20pm near kilometre marker 168 on Sukhumvit Road at a U-turn in front of a gas station, said Pol Lt Potsawat Siripornnoppakun, chief investigator at Sattahip police station.

The motorcycle was smashed into pieces by the force of the collision. The body of the 76-year-old man (name withheld) was lying on the road 30 metres away from the wreckage when emergency units arrived.

A new Toyota Hilux Revo pickup truck with no licence plates was stopped nearby, with damage to the left front side.

Driver Sunthorn Sitthi, 25, waiting at the scene, told police he was driving to Sattahip district when the motorcycle cut suddenly in front of him at the U-turn. He was unable to avoid a collision.

People witnessed the crash would be called for questioning, said police. The investigation was continuing. 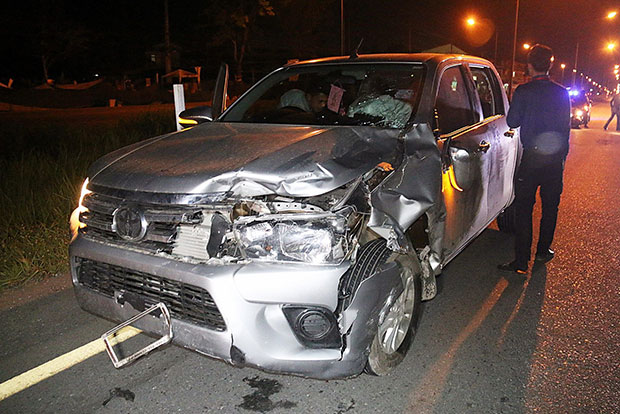 The pickup truck involved in the accident, with damage to the left front side, parked on the road after the crash. Police said it had no licence plates. (Photo taken from rescue volunteer Nantapon Thipsri)

KHON KAEN: Move over Paul the Octopus, Thailand has a new claimant to the football forecasting crown: Boy the “psychic” lion, who has so far correctly called four Euro 2020 matches.