Commuters get on a train at Tao Poon station after the opening of the link connecting it with Bang Sue station on Friday. (Photo by Pornprom Satrabhaya)

The Mass Rapid Transit Authority of Thailand (MRTA) has opened the rail service on the 1.2km missing link between its Purple Line and Blue Line, ending the need for a 30-minute bus ride between the two electric train stations during rush hours.

Following the opening at 12pm on Friday, shuttle buses taking passengers from Tao Poon station to Bang Sue station will stop the service on Saturday. The new interchange station of the two lines is now Tao Poon.

According to the MRTA, the missing link took five months to complete.

MRTA acting governor Rithika Suparat said the Purple Line would charge the same promotional fares until Jan 31 next year -- 14-29 baht on weekdays and 15 baht for the entire route on weekends and public holidays.

After January, tickets on weekdays will cost 14-57 baht for MRT and MRT Plus card holders, and 14-70 baht for those who purchase one-way tokens. On weekends and holidays, the new prices are 14-43 baht for both MRT card and token holders.

Prime Minister Prayut Chan-o-cha, who chaired the link’s opening ceremony, said commuters could rest assured that the fares would be cheaper in the future.

He urged private electric train companies to consider cutting the prices so that low-income earners could use the services more frequently.

He said the increased access to public transportation for commuters through cheaper prices and more convenience would improve Bangkok traffic overall.

“The present traffic situation continuously affects the quality of life for the public,” Gen Prayut said. “We must urgently link transportation systems so commuters will no longer be stuck in traffic jams two hours a day like now.”

He added that the government is currently discussing plans to introduce monorail systems into severely congested areas in Bangkok.

According to the Ministry of Transport, further plans for the construction of the Brown Line station -- overseen by the MRTA -- are currently being discussed. The line links Khae Rai with Bung Kum.

Upon its completion, the East-West Brown Line will act as a feeder, connecting the six existing and planned mass transit lines, according to the ministry. 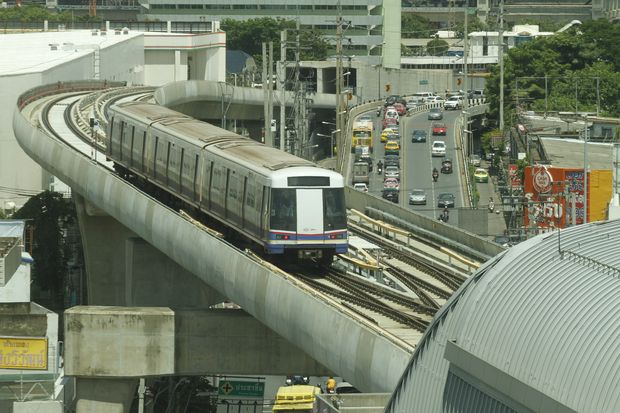 A train heads for the Tao Poon station from the Bang Sue station on Friday. (Photo by Pornprom Satrabhaya)