Thai people nationwide joined together in making merit and extending their best wishes for Her Majesty the Queen of King Rama IX on her 85th birthday anniversary yesterday. 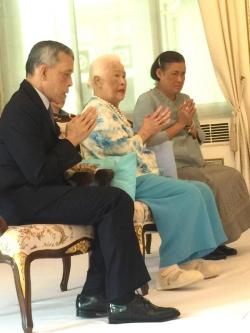 SPECIAL DAY: His Majesty the King and Her Majesty Queen Sirikit of King Rama IX make merit to mark her birthday at Chitralada Palace. They are accompanied by HRH Princess Maha Chakri Sirindhorn. Photo: the Royal photo

Prime Minister Prayut Chan-o-cha led his cabinet members to give alms to 851 Buddhist monks from temples in Bangkok in honour of Her Majesty the Queen at the Royal Plaza and as a tribute to the late monarch.

He was joined by members of the legislature and the judiciary, military leaders and high-ranking government officials. They proceeded to the Grand Palace to sign well-wishers' books to wish Her Majesty a happy birthday.

Dried foods and necessities were also gathered on the same occasion to be given to flood victims in the Northeast through an aid distribution centre of His Majesty King Rama X.

Seven palaces across the country, including Bang Pa-in Palace in Ayutthaya and Klai Kangwon Palace in Prachuap Khiri Khan's Hua Hin, yesterday opened their doors to the public for them to sign well wishing messages for Her Majesty.

In the evening the general public joined a candle-lighting ceremony for the Queen.

The highlight of yesterday's celebrations was at the Royal Plaza, where well-wishers turned up in blue shirts, the Queen's birthday colour.

In the provinces, provincial governors led state officials and members of the public to give alms to Buddhist monks in the morning and to light candles in the evening.

Celebrations were also held nationwide to celebrate National Mother's Day in conjunction with the Queen's birthday.

YALA: A man died after being shot and his pickup set ablaze in Bannang Sata district on Tuesday night in an attack which possibly followed a drug conflict, police said.

Spain fans were left in tears on Tuesday (Dec 6) after the team crashed out of the World Cup on penalties to Morocco, whose fans filled the streets with cheers, flares and flags. Morocco has now made it to the quarter-finals for the first time over former champions Spain. - REUTERS