City to reward people who dob in street offenders

A man is seen riding his motorcycle on a footpath near a sign prohibiting motorcycles or vehicles parking on or riding on the sidewalk. It warns violators face a fine of up to 5,000 baht. (Photo by Apichart Jinakul)

City Hall launched a new campaign to clean up the streets on Tuesday, promising to give half the fine to people who report motorcyclists using footpaths, people dumping garbage in public spaces or canals, and illegal hawkers.

He said the fine the city collected in each case would be shared equally with the informant.

Bangkok governor Aswin Kwanmuang had already signed a regulation under the city's Maintenance of Public Sanitation and Order Act (1992) on the conditions for the sharing of fines collected from offenders.

The regulation covered motorcycles being ridden on pavements, people discarding rubbish in public areas or into canals, hawkers illegally selling their wares on the streets and people who illegally put up advertising signs in public areas.

People who spot offenders can report them to the City Law Enforcement Department’s hotline 02-465-6644, by sending a letter to the department, emailing it to citylaw_bma@hotmail.com, or to the BMA's Facebook account, to Line chat app group http://line.me/R/ti/g/MN4UVW0C2 or at any of the 50 district offices.

Informants must provide evidence of the offence, such as photos, videos, or the vehicle registration number, along with the date, time and location, Pol Lt Gen Amnuay said.

Informants will be entitled to half of the money the offender is fined. Rewards could be collected at local district offices within 60 days of the offence being reported. If they fail to collect it by then, the money will go into the city administration’s coffers.

Under the regulation, offenders face maximum fines of up to 10,000 baht, the deputy governor said.

“I believe good citizens will take a participating role in this law. This is part of City Hall’s clean-up campaign that allows public participation. They will serve as the eyes and ears of the city administration.

"If they spot people breaking the law and report it to the thetsakit (city inspectors) office, they will receive half of the fine imposed at the time. Their personal information will be kept confidential,’’ Pol Lt Gen Amnuay said.

The offer was effective immediately, he added. 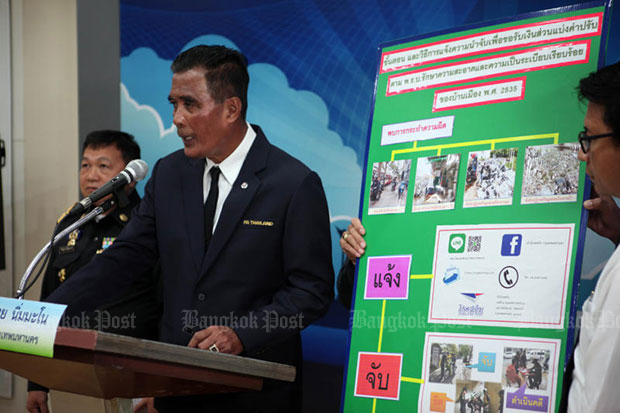 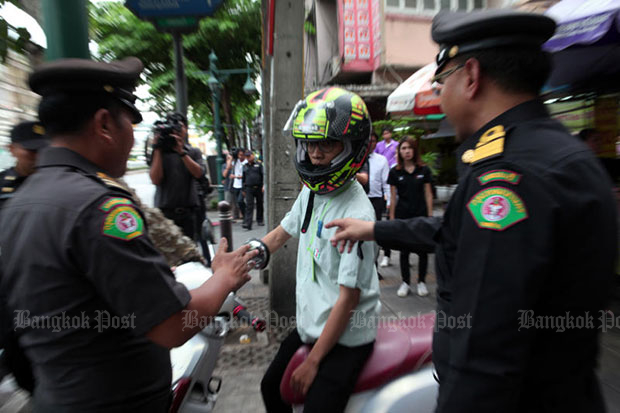 Thetsakit officers warn a motorcylist against riding his bike on the footpath. (Photo by Apichart Jinakul)