A group of new generation members of the Barisan Revolusi Nasional (BRN) insurgent movement stole seven vehicles in Pattani and Songkhla to use in bomb attacks in what authorities described as an "unexpected" new attack tactic in the far South.

Army chief Chalermchai Sitthisad said the group found responsible for Wednesday's car robberies in which one civilian and one militant were killed is a BRN group controlled by Dulloh Waemano.

New members who don't have criminal records were being trained to replace their predecessors who have either been arrested or gone into hiding after authorities obtained information about them linked to past attacks. These young and new members of the BRN have joined the group because they are hired, not because they agree with the group's ideology, Gen Chalermchai said.

Deputy Prime Minister and Defence Minister Prawit Wongsuwon confirmed the BRN was behind the incidents, saying at least four out of about seven suspects involved have been clearly identified by authorities.

The the showroom thefts were carried out in Songkhla instead because tight security has been maintained in Yala, Pattani and Narathiwat, he said, referring to the robbery of the six pickup trucks at a used car shop called Wang To Car Centre in Na Thawi district of Songkhla.

However, the robberies started in Pattani. In a summary of the incidents by the Internal Security Operations Command (Isoc) Region 4's forward command, the insurgent group stole a pickup truck from a couple in Pattani's Yarang district about 4.30am.

The stolen truck was then used by about 10 people -- dressed in outfits looking similar to those of security authorities -- to travel to the used car shop in Songkhla where they made off with six trucks and abducted four people including the shop owner, said Col Pramot Phrom-in, spokesman for the Isoc Region 4. 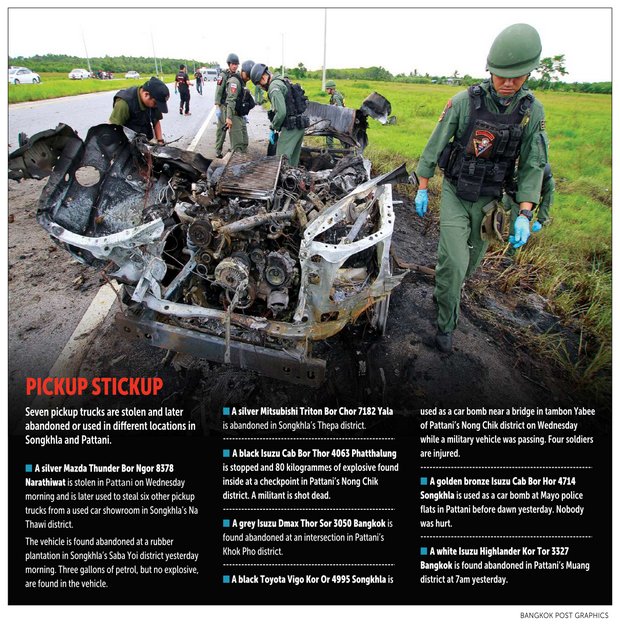 Mr Thanisak, who owns the used car shop, said he and Mr Wirasak had ran away from the gunmen while they were trying to kill the other two hostages.

Saharat died but Mr Prathanphon survived because he pretended to be dead when shot by a gunman at a rubber plantation in Ban Khwan Hin Phao in Thepha district. The gunmen apparently intended to kill all four hostages, Mr Thanisak said.

After the robbery, authorities were sent to hunt down the group. A suspect later identified as Nur-arsan Arwae, 27, a resident of Pattani's Muang district, was killed in a gun exchange with authorities after he refused to stop one of the stolen cars at a security checkpoint in Pattani's Nong Chik district.

The dead suspect was found to be a student at a privately-run Muslim religious school in Pattani's Muang district. Security authorities will invite the director of the school in for questioning, a security source said.

All other stolen trucks were located and seized back in 19 hours. One of them was fitted with a bomb and blew up on Wednesday night in Pattani's Nong Chik district. No one was injured. Another one was dropped in front of a police flat at Mayo police station in Pattani about 3.50am Thursday, about a minute before the vehicle blew up, damaging nearby buildings. A few officers who were approaching to inspect the vehicle were slightly injured.

Gen Prawit described the attack plot as outrageous as the suspects had apparently aimed to use those stolen cars in bombing attacks. "The authorities have tried every way to prevent attacks in the southern border provinces. But if these suspects aren't arrested, they will possibly next target Songkhla. And I believe there are more major violent plots to come," Gen Prawit said.

Gen Udomdej said he had to apologise that some security slips might occur sometimes because Yala, Pattani, Narathiwat and four Songkhla districts are large areas.

Meanwhile, deputy national police chief Srivara Ransibrahmanakul admitted security authorities had received a warning about a possible attack about two weeks ago and they had tried their best to prevent it from happening.

Tougher nationwide security has been adopted over concerns that more violence may occur, he said, adding that security authorities throughout the country have been ordered to step up their work.