A fire rages through wooden shophouses at a market in Chachoengsao's Phanom Sarakham on Saturday morning, destroying seven units of the shophouses built in a row. (Photo by Sonthanaporn Inchan)

CHACHOENGSAO - A fierce fire raged through a community at an old market in Phanom Sarakham district at dawn on Saturday, destroying seven shophouses and forcing residents to flee in panic.

Nobody was injured in the blaze that broke out at the Tha Kwian market community in Village Moo 1 in tambon Phanom Sarakham, said Pol Maj Surapisit Maingam, investigation chief at Phanom Sarakham police station, who was reported at 7am.

More than 10 fire trucks from the tambon and nearby areas were deployed to the scene to combat the fire that was raging through two-storey shophouses before spreading to other wooden shops and houses built in a row. Residents hurriedly removed their belongings.

Firefighters managed to put the fire under control at 9.17am. Seven shophouses were reduced to ashes.

Pol Maj Surapisit said the cause of the fire remained unknown for the time being. Nobody was inside the two shophouses  -- one selling bicycles and the other selling oyster omelets -- which were engulfed in flames when firemen arrived. Police had yet to find out which shop caught fire first.

Forensic police were collecting evidence to establish the cause of the blaze, said the investigation chief. 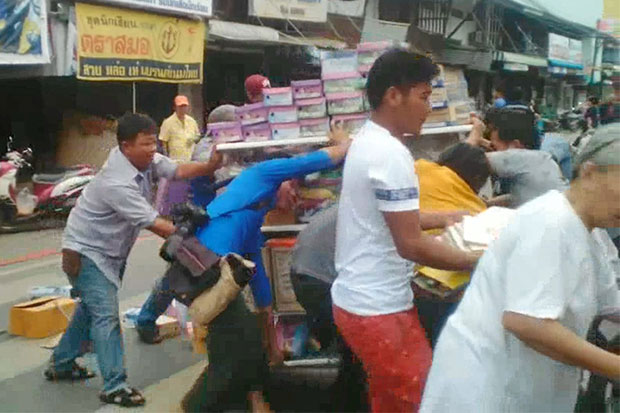 Residents rush to bring out their belongings as the fire spreads quickly. (Photo by Sonthanaporn Inchan) 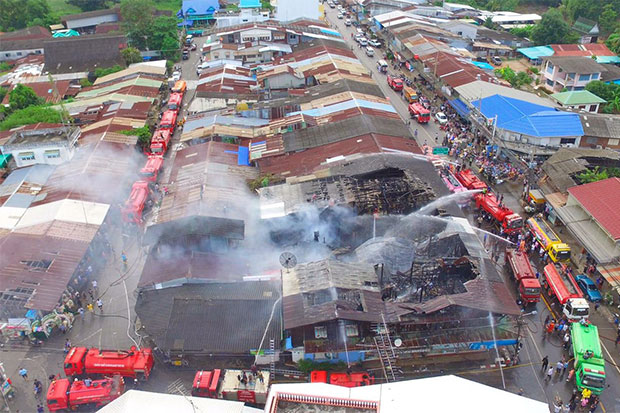 Fire trucks are deployed to the fire-gutted market community in Phanom Sarakham district, Chachoengsao. The fire was later brought under control at around 9am on Saturday. (Photo by Sonthanaporn Inchan)