Vials of e-liquid used in electronic cigarettes, which are illegal in Thailand, were among the items seized in the raid in Kanchanaburi on Friday. (Photo by Piyarach Chongcharoen)

KANCHANABURI: Police say they have broken up a major online electronic cigarette sales ring following a raid on a warehouse where about 3 million baht worth of smoking kits and accessories were seized.

A combined team of police, customs and excise officials raided the warehouse in tambon Ban Nua in Muang district on Friday and found 57 e-cigarettes, 2,849 bottles of e-liquid and 555 other smoking kits stored there.

Mr Trisak was a major online seller of e-cigarettes and smoking kits, according to authorities, having jointly invested in the sale of the banned products with a Malaysian partner. The seized items had a face value of 3 million baht, said police.

During the interrogation, police said, Mr Trisak confessed that he had sold the banned smoking devices via a Line chat group called “TK Gadget’’ and a website. He said Mr Theerawat was the administrator of the website, which also sells legal products such as car air purifiers and drinking cups.

He also implicated another man and a woman in the sales operation, and police are now looking for them.

Police have repeated their warning to people against possessing electronic cigarettes. Under the existing tobacco law, only products made of tobacco leaves can be imported legally. The Commerce Ministry has banned the import of e-cigarettes and baraku or hookah and related products. 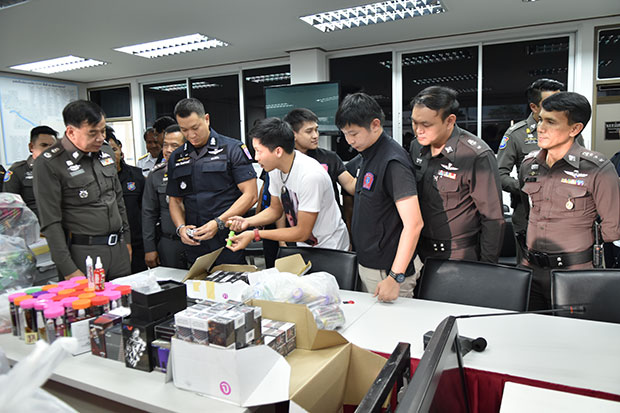 Police inspect e-cigarettes and related materials seized from a warehouse in Kanchanaburi. (Photo by Piyarach Chongchaoren)

Telenor Group, the major shareholder of DTAC, has reaffirmed its plan to maintain good governance and high business standards when it merges with True Corporation.

40 tonnes of drugs to go up in smoke this week

The Food and Drug Administration (FDA) and narcotics suppression authorities on Monday inspected more than 40 tonnes of confiscated illegal drugs worth over 34.6 billion baht before they are incinerated at a designated facility this week.

Bangkok on Monday topped a poll of the top 10 cities in Southeast Asia, as voted for by visitors to the Travel + Leisure website (travelandleisure.com).

40 tonnes of drugs to go up in smoke this week

BMA says 'no' to pot hub