Fishing has been banned along this stretch of Huay Sampad creek in Kumphawapi district, Udon Thani, after it was contaminated by copper ore loaded on a trailer truck which crashed there on Aug 5.(Photo by Yuttapong Kamnodnae)

UDON THANI - Fishing has been banned in part of a creek found to be contaminated with heavy metals after a trailer truck loaded with copper ore plunged into it in Kumphawapi district early this month.

Copper, lead, arsenic, cadmium, mercury, nickel and zinc were found in clay-dune samples taken from Huay Sampad creek in tambon Pasuk after the truck overturned on Mittraparb Road and slid into the water around 11pm on Aug 5.

Local people catch fish in the creek and eat them. Health officials were concerned it might be contaminated by the ore, posing a health risk, and ordered it be tested.

Deputy Udon Thani governor Somwang Puangbangpho on Friday issued an announcement prohibiting  people from taking fish and other aquatic life from the creek within a distance of 300 metres of the accident scene.

People were also warned not to handle the clay or mud in the creek until the contamination was cleaned up.

Chalieo Leesa-nga, director of the environmental office 9, said water in the creek within a 300 metre distance was found to be contaminated with copper in excess of the standard health level. Beyond 300 metres the water quality met the standard, he said.

Clay dunes within 100 metres were contaminated with heavy metals. Beyond that they met the accepted standard.

Monsang Pusiriwat, head of the provincial natural resources and environmental office, said the truck operator had salvaged the vehicle and cleared the copper ore from the creek after the accident.

The Udon Thani governor had ordered that samples of the water, clay dunes and aquatic life be tested, said Mr Monsang. 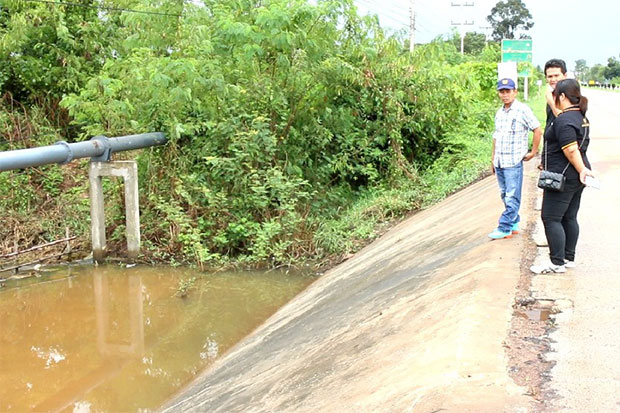 Residents view the creek in Kumphawapi district, Udon Thani, polluted when a trailer truck loaded with copper ore from Laos overturned and plunged into it early in August. (Photo by Yuttapong Kamnodnae)