Two Chinese tourists given first aid for wounds to the head inflicted by a lone robber wielding a long-bladed knife, seen on the table, in Samut Prakan's Bang Bo district in the early hours of Thursday. (Photo by Sutthiwit Chayutworakan)

SAMUT PRAKAN - A man arrested for attacking and injuring two Chinese tourists with a long-bladed knife in Samut Prakan early on Thursday has told police he mistook them for members of a rival gang.

Paisarn Huangmak, 26, admitted to having attacked Zhou Liu, 27 and Yang Xia, 28 on Bang Na Garden Road in tambon Bang Bo shortly after midnight, but said he was not trying to rob them.

Police were not convinced. The suspect was charged on several counts, including theft causing injuries and  illegally carrying  a weapon in a public area.

Footage from closed-circuit cameras captured the robber fleeing on a bicycle after the attack.

Mr Zhou sustained serious wounds to his forehead and severe bruising. Ms Yang suffered a serious cut at the base of her right ear.

The knife was about 23 inches long, including the handle,  police said. The blade looked rusty.

The two tourists were rushed to a nearby hospital after being found by  residents attracted by the noise of the attack.

Police said after visiting them that their condition had improved, but they remained under the close care of doctors. 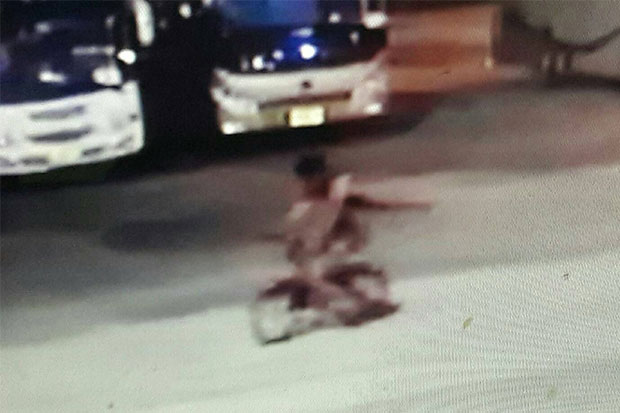 A closed-circuit television camera caught this image of the suspect fleeing on a bicycle. (Photo by Sutthiwit Chayutworakan) 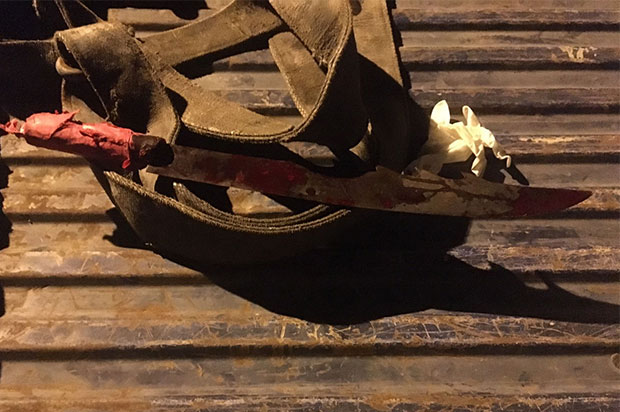 The long-bladed knife left at the scene of the attack. (Photo by Sutthiwit Chayutworakan)

Two Chinese tourists were seriously injured when attacked by a lone robber wielding a long-bladed knife in Bang Bo district in the early hours of Thursday.

The attack occurred on Bang Na Garden Road in tambon Bang Bo about 12.30am, police at Bang Bo said.

The two tourists were found lying injured in scrub on the side of the road by nearby residents investigating the sound of people quarrelling loudly. A passing taxi driver called police.

Mr Zhou sustained serious wounds to his forehead and severe bruising. Ms Yang had a serious cut at the base of her right ear. They were given first aid and then taken to a nearby hospital. Police found a long, blood-stained knife at the scene of the attack.

Police learned the pair were returning to their hotel when they were attacked by a man riding a bicycle. He producd a long knife and struck Mr Zhou on the forehead. He then cut the woman below her right ear. The two victims fell to the ground and the attacker tried to snatch their rucksacks.

The robber was disturbed by people coming from their houses to investigate the noise, and the lights of a passing taxi shining on the area and he fled, leaving his rusty, long-bladed weapon behind.

Police said he probably lived nearby. They were investigating. 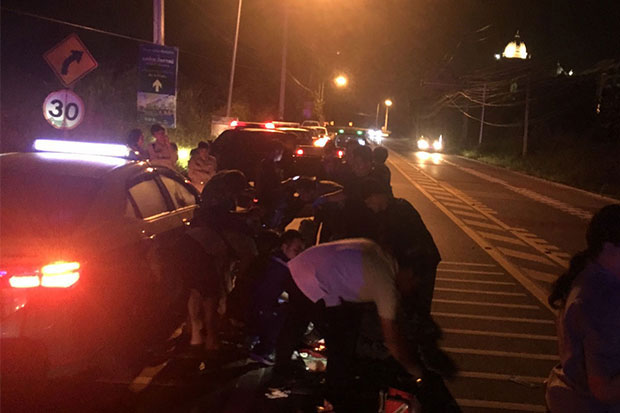