The three-metre crocodile caught in a coastal marsh close to Lepang beach in Phuket's Thalang district. (Photo by Achadtaya Chuenniran)

PHUKET - A three-metre crocodile believed to be the one filmed swimming in the sea off Bang Tao beach last week has been captured in a coastal marsh in Thalang district.

The hunt began about 8pm on Thursday after the crocodile was spotted in a large marsh close to Lepang beach in tambon Cherngtalay.

Three boats were deployed to catch the reptile with a team of about 15, people from the Department of Fisheries and local fishermen.

They used nets to corner the crocodile and prevent it venturing from the shore.

Nikom Suksawat, one of the hunters, said the crocodile slipped through nets twice before it was finally caught about 3.30am after two more nets were brought into play.

He said it was still not clear if it was a fresh or salt water species.

The crocodile was being taken to the Phuket Coastal Fisheries Research and Development Centre in tambon Pa Klok of Thalang district, where it will be examined by experts.

The footage was captured by a drone operated by an Australian tourist identified only as Mike after he spotted the creature while strolling along the beach. Authorities have verified the video clip and found it was shot on Aug 25 and uploaded on Tuesday. 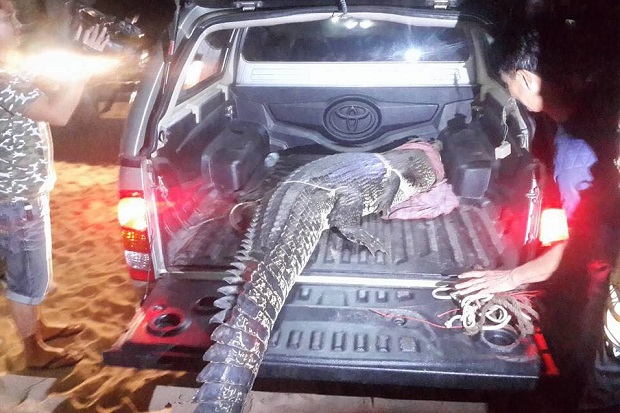 The captured crocodile in the back of a pickup truck before being taken to Phuket Coastal Fisheries Research and Development Centre in Phuket. (Photo by Facebook Page เสียงประชาชนคนภูเก็ต)