PHUKET - A Nigerian man has been arrested for allegedly robbing and shooting a Russian woman during a break-in at her house in Muang district on Aug 30.

Chijioke James Chukwuweike, 27, was detained at a rented house in tambon Rawai in Muang district  around 10pm on Thursday, Pol  Maj Gen Theera Thipchaoren, chief of Phuket police, said at a news breifing on Friday.

Police found 92 items in his house believed to have been stolen. His Thai wife, Sasipa Nakhonthaisong, 33, also faces theft charges. Police allege she had sold a stolen computer notebook they seized earlier, before raiding the house.

They had a young baby with them when arrested.

Mr Chukwuweike is charged with theft and the attempted murder of Elena Kharenko, 51, a Russian woman, after breaking into her house around 2.30am on Aug 30.

The woman told police she woke up and saw a burglar inside her house near Rawai beach. The burglar shot and wounded her and made off with a safe containing valuables.

Police examined closed-circuit television footage, leading to the arrest of the Nigerian.

On Friday, three of them arrived at the police station to identify goods stolen from them.

Police said the suspect was in Thailand illegally. He was not working, but still possessed many valuable items and cash. 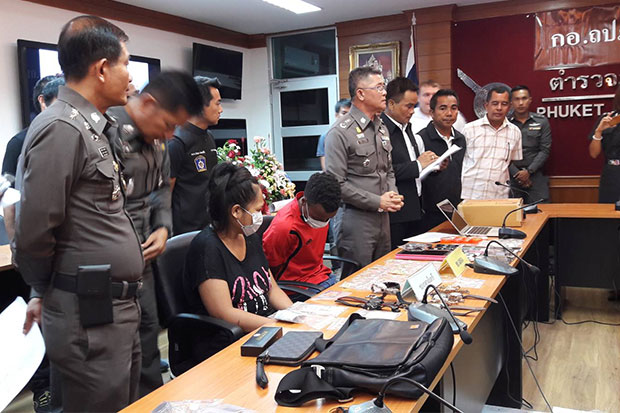 The 27-year-old Nigerian suspect and his Thai wife, 33, at a police media briefing in Phuket. (Photo by Achadtaya Chuenniran)