City Hall has instructed street vendors in Khao San Road to move their stalls from footpaths onto the road for a seven-day trial period starting next Tuesday.

The plan was discussed at a meeting between the Bangkok Metropolitan Administration (BMA) and street vendors from the Khao San area.

According to the BMA's Phra Nakhon district chief Wutichai Bunyasit, the meeting was held to minimise tensions between the state sector and street vendors, and come up with a suitable solution that will satisfy both sides.

Mr Wutichai said the plan to move the street stalls in the Khao San area is part of a government initiative to "return all footpaths to the people."

"We want to listen to the street vendors, to see if the proposed solution to move their stalls onto the road will work," Mr Wutichai said.

After an hour-long discussion, the meeting concluded the BMA will give the plan a one-week trial starting Sept 12.

Under the trial, each stall is required to move from the footpath onto the road and vendors are allowed to sell their wares from midday to midnight.

The size of each stall must be no more than two metres long and one metre wide. "If the trial period tells us that our solution isn't effective enough, we will have to develop a new strategy in the future," Mr Wutichai said.

He said past attempts to regulate the Khao San area have not been successful because the authorities "did not try to understand the problems of those who are affected by the reorganisation." 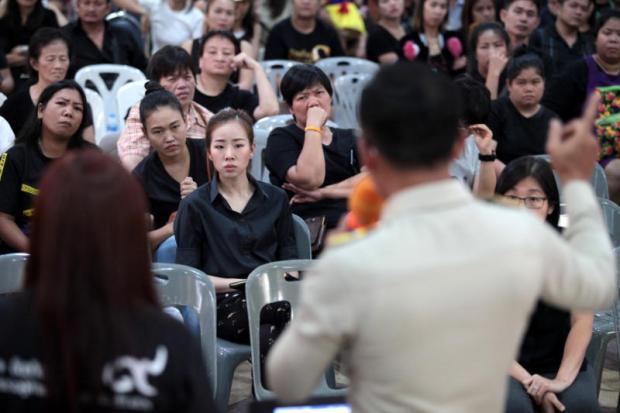 Vendors on Khao San Road listen to a City Hall official explain the need to keep footpaths clear and for them to move their stalls onto the road for a seven-day trial period starting next Tuesday.  (Photo by Chanat Katanyu)

Charatsaeng Silanon, who has been selling clothes in the area for over 20 years, said Khao San's street vendors did not want to move their stalls from the footpaths onto the roads.

"Obviously, we would rather stay where we are," she said. "Khao San isn't an open road like Chinatown, and no buses actually come into the road."

She said the government wants to reorganise Khao San Road because it has always been a popular spot for tourists to visit.

According to her, street vendors in the area are already cooperating with government policies, by providing garbage bags for visitors to throw away waste and not allowing vendors to block the road's entrances.

Mrs Charatsaeng also said moving street vendors onto roads could become a problem if vendors relocate to areas that are normally occupied by taxis and tuk-tuks.

She said the meeting between the street vendors and BMA did not address this issue.

"If we move into their places, how are we supposed to avoid conflict? I am sure problems related to this will surface in future," she said.