Interpol has posted its red notice for Vorayuth Yoovidhya online publicly, informing the world the scion to the Red Bull energy drink fortune is wanted in Thailand for reckless driving causing the death of a policeman five years ago. 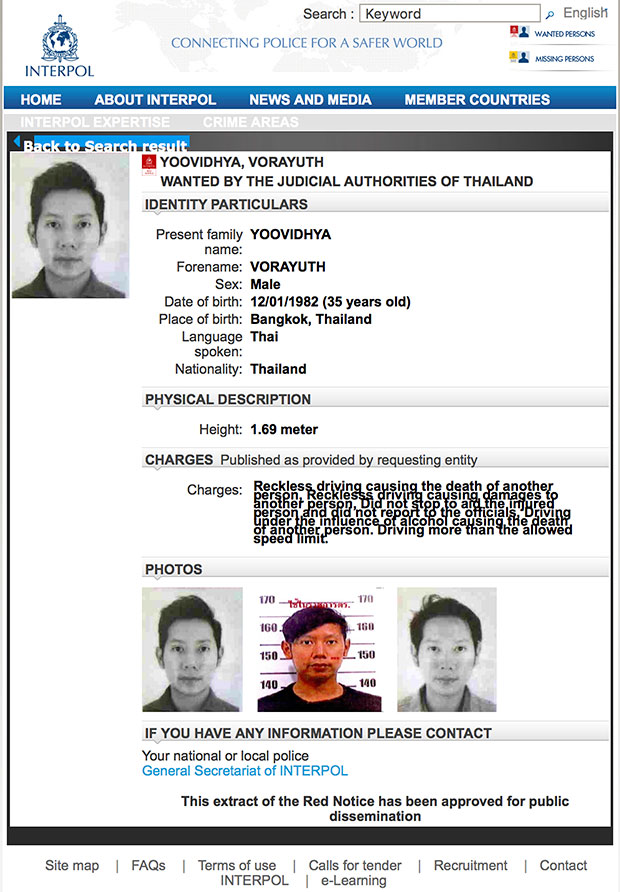 This image made from the website of Interpol shows the "wanted" listing for Vorayuth Yoovidhya. (Interpol/AP photo)

The international police network made the "red notice'' for Mr Vorayuth viewable to the public on Monday. Law enforcement officials have been able to access the listing since last month.

Interpol says a red notice is a request to police forces around the world "to locate and provisionally arrest an individual, pending extradition''.

Mr Vorayuth has avoided meeting prosecutors ever since, and his case has raised questions about authorities being lenient in cases involving wealthy suspects, and allegations of foot-dragging.

Mr Vorayuth left Thailand in April, days before authorities finally issued an arrest warrant, and his Thai passports were later revoked. He went to Singapore and then to Taiwan, but his whereabouts since early May are unknown.

The suspect originally faced three charges, but only one remains current, because he has avoided authorities for so long. A speeding count expired in 2013, and a hit-and-run charge expired early this month. The statute of limitations for the last charge, reckless driving causing death, runs out in 10 years.

Mr Vorayuth's family owns about half of the Red Bull empire, which was co-founded by his grandfather.

For more than four years after the crash he lived a high-flying and even public life.

Relying in part on public social-media posts made by his family and friends, the Associated Press found out that Mr Vorayuth had attended Formula One races, snowboarded in Japan and cruised Venice, often flying in private Red Bull jets, and all the while failing to show up for court appearances.