The army has finally decommissioned its controversial 350-million-baht airship after eight years' service during which time the blimp crashed once while it was mostly grounded the rest of the time as it was plagued by various defects.

Officials involved in the procurement plan and its operations, including Prime Minister Prayut Chan-o-cha, Deputy Prime Minister Prawit Wongsuwon and Interior Minister Anupong Paojinda, were tight-lipped when asked by the media Thursday whether the airship was really worth the money spent and the additional amounts spent on maintenance. 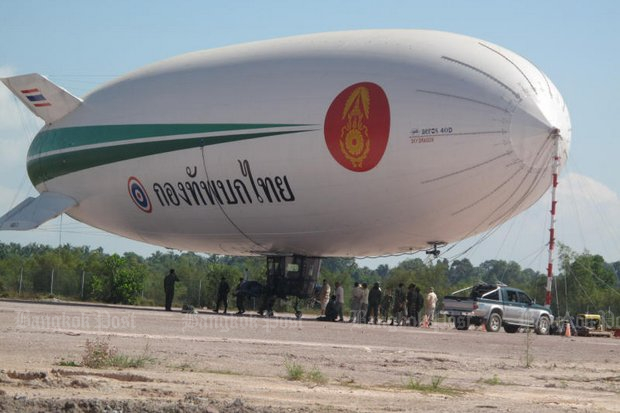 The decommissioning of the airship was leaked when an army source responded to reporters' questions about a fresh auction by the army to procure a military vehicle to tow a barrage balloon.

He revealed to the media the auction was not for the airship as it had already been decommissioned, but for towing the barrage balloon used in parachute training.

Reporters immediately switched their focus from the auction for the new vehicle to the decommissioning of the airship.

When confronted with questions over the airship from a group of reporters Thursday, Gen Anupong said he had no comment because he retired as army chief seven years ago.

He said the reporters had better ask Gen Chalermchai instead.

When the reporters pressed him on why the airship was decommissioned so soon, Gen Anupong again said they had better direct their questions to the current army commander. 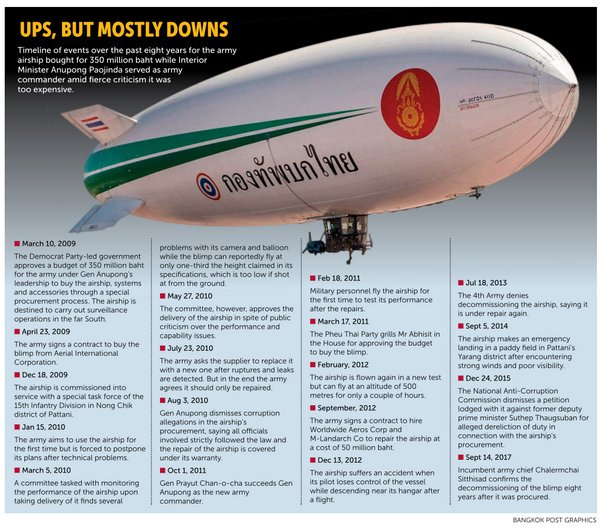 The last time the airship was flown was on Dec 13, 2012, when it was used in a patrol operation during a visit to the deep South by former prime minister Yingluck Shinawatra.

Afterwards, the pilot lost control of the airship while attempting to land near the airship's hangar.

Gen Chalermchai insisted the decommissioning came following the expiry of the lifespan of the airship's outer skin.

The airship's cameras are all still functioning properly, so they might be used for another aircraft, he said.

"It will be too dangerous to assign anyone to work on board an airship where its useful life has expired," he said, explaining the decommissioning.

The Internal Security Operations Command (Isoc) Region 4's forward command, responsible for overseeing security in the South, is overseeing the transfer of the airship's cameras to be used in another aircraft, he said.

"Some adjustments to the cameras will probably make it possible to continue using them, as they are expensive. But there won't be any new purchases to replace the airship," he said.

Asked if the decommissioned airship could be called a "deflated" one, Gen Chalermchai said the blimp had not been a complete waste of time and money because it had actually been used before it was withdrawn from southern operations against separatist insurgents.

He insisted he had first-hand experience of using the airship while on assignment in the southernmost provinces in 2011, travelling in it himself.

The Aeros 40D S/N 21, nicknamed Sky Dragon, together with the security patrol system was purchased for 350 million baht in 2009. Of the total price, 260 million baht was spent on a pair of AXsys V14 MS II surveillance cameras and 70 million on the ground control system that included an armoured vehicle.

The airship went into service in 2009, when Gen Anupong served as army chief and Gen Prawit was defence minister.

Leaks were detected in the airship, and since refilling with helium is costly, the airship had mainly been kept at a hangar at the 15th Infantry Division in Pattani's Nong Chik district, until Gen Prayut became the new army commander.

The army reportedly had to spend up to 25 million baht in some years on refilling the airship with helium, even though it was almost never used.

Gen Prayut, as army chief, approved the hiring of a private company to maintain the airship at a cost of 50 million baht a year, which allowed the blimp to be flown again occasionally on security surveillance operations.

The airship, however, was criticised as being substandard and it ended up stuck in a hangar until its useful life expired.

The purchase of the controversial airship previously triggered a dereliction of duty allegation against former deputy prime minister Suthep Thaugsuban.

He was at the time accused by the Pheu Thai Party of failing to stop the army from buying the airship at an inflated price.

The NACC said it found no evidence to prove that Mr Suthep was guilty of dereliction of duty.