Sugary drinks, cigarettes and most alcoholic beverages saw hiked excise taxes as the new rates of the levy came into force yesterday. 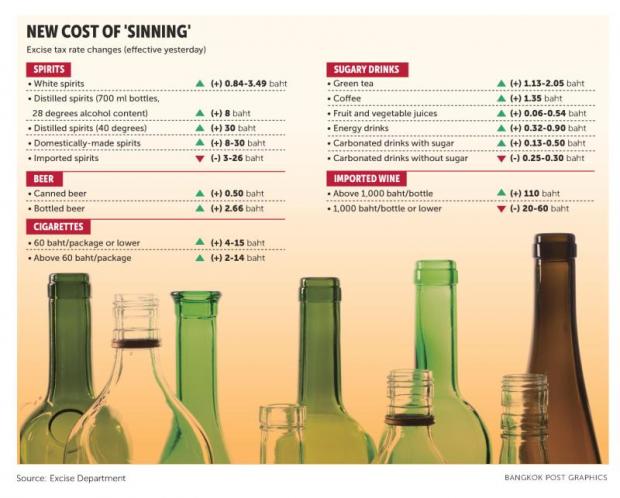 The tax hikes average 2% and this could help boost state revenue to 12 billion baht, said Somchai Poolsavasdi, director-general of the Excise Department. The new rates are part of the Excise Tax Act 2017, which came into force yesterday.

With the new rates of the excise tax now applied, Mr Somchai said sellers should not raise the retail prices of their products straightaway since they still have stocks of goods levied under the previous rates.

They should release the old stocks first, he added.

Consumers who experience a sudden rise in product prices after the new rates took effect can report the change to the Department of Internal Trade (DIT), Mr Somchai said.

As for so-called sin taxes, which are applied to alcoholic drinks and cigarettes, the new excise rate takes into account both value and quantity, as opposed to the previous legislation which targeted either value or quantity, depending on which one is higher.

Based on the new tax rates on liquors, 45% will be collected from the value and 55% from the degree of alcohol in compliance with the calls by the World Health Organization (WHO) and the Public Health Ministry, which want people to take care of their health by drinking carefully, according to Mr Somchai.

The tax on cigarettes will be based on both value and quantity. Cigarette packs priced 60 baht or lower will face a 20% tax and those above 60 baht will see a levy of 40%.

According to Mr Somchai, in two years' time the excise tax for cigarette packs priced 60 baht or lower will be raised to 40% -- the same rate applied to packs priced above 60 baht.

Based on the quantity, the new rate has increased the tax from 1.10 baht a cigarette to 1.20 baht.

Referring to vegetable and fruit juices, which were previously exempted from excise tax on grounds that they are made from farm produce, Mr Somchai said the new tax structure will take aim at the sugar quantity of the beverages, not their value.

Mr Somchai said under the free market he did not believe the new excise tax rates would trigger a hike in the retail prices of products.

Meanwhile, imported vehicles will face an average tax hike of 2%. Regarding those priced 10 million baht or higher, the tax would increase by 500,000 baht, Mr Somchai said.

Some automakers reported they would bear the rising cost from the tax hike by themselves for some models, he said.

The new tax rate is believed to induce sugary drink manufacturers to reduce sugar quantity in their products, which would be beneficial to consumers, he said, adding that liquor producers are likely to reduce the degree of alcohol content in their products to bring down the tax burden as well.

In two years' time, the excise tax on cigarettes and sugary drinks would be raised, Mr Somchai added.

The director-general noted the new tax rates would not push up the cost of living as most of the products under the excise tax are not essential items and some of them are harmful to people's health.

The DIT has been contacted to survey shops which may have hoarded products before yesterday with the intent to sell them later at exorbitant prices, Mr Somchai said.

Those found to have committed such an offence could face prosecution, which carries a jail term of up to seven years and/or a fine of up to 140,000 baht.

Meanwhile, some shops were reported to have stockpiled alcoholic drinks and cigarettes. Some avoided selling products in mass numbers, claiming they are short of goods.

Some convenience stores were said to limit the sales of these products to ward off hoarding.

In Hat Yai district of Songkhla, bordering Malaysia, some shops were found to have raised the prices of cigarettes and liquor a couple of days ago.

Sales of cigarettes, meanwhile, have dwindled. The owners of these shops said they raised the price of a pack of cigarettes from 87 baht to 90 baht.

According to several shop owners, customers tend to buy smuggled cigarettes as they are only 20-25 baht a pack.

The demand for untaxed liquor is also on the rise, they said.

"As for foreign-made cigarettes, their popularity has spread from the city to rural areas," a shop owner said.

These smuggled items were reported to have been brought from Malaysia to Thailand through Narathiwat, Yala, Songkhla and Satun by land and sea.

The elderly poor are in line for a bigger monthly allowance from the higher revenue from sin taxes.

Thais to compete in Winter Olympics under national flag