SURAT THANI: An American man wanted for child sex abuse in his home country has been arrested on Koh Samui.

He is being held in custody at the Koh Samui police station pending his transfer to the Immigration Bureau for extradition to the United States.

Hall is suspected of having fled the US after posting bail, resurfacing as a teacher at a school in Khon Kaen by using a passport in a friend’s name.

His arrest came shortly after the Friends of Women Foundation circulated a widely viewed warning on social media that a suspected American paedophile was hiding in Thailand and posing as an English teacher under a false name.

On Friday evening, police received a tip-off that a foreigner who resembled the suspect was spotted at the pier. Officers rushed to the pier and asked to check the man’s passport, said Pol Capt Thersak.

However, the suspect could not produce his passport. He was later taken to the Koh Samui station for questioning.

After intense interrogation, he admitted to be the wanted man as shown in a photo sent by the US embassy, said Pol Capt Thersak.

According to the Cullman Times, a newspaper in Alabama, Mr Hall was wanted on child sex and physical abuse charges in Cullman and Madison counties.

The Austin American-Statesman newspaper in Texas reported that Hall first came to the attention of Thai authorities in March, when the family of a woman named Nittaya Polseepim reported her missing. She was last seen taking a man, who called himself Tyler Smith, to a teaching job in Rayong.

Authorities believed that Smith was really Hall, and that Ms Nittaya, who was reportedly in a relationship with him, may have been helping him to evade arrest.

Ms Nittaya, who ran a business helping foreigners obtain teaching jobs, has still not been heard from. Her sister, Jamjit Polseepim, earlier posted a plea for information about her sister’s whereabouts on a Facebook group page titled “Teaching Jobs in Thailand". 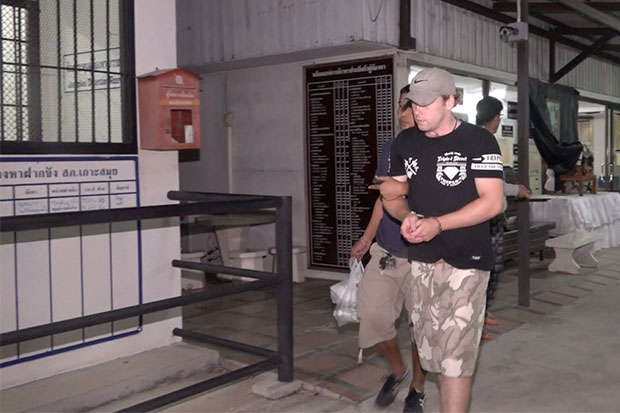