A lottery vendor used a mobile app to verify the QR code on two lottery tickets, and discovered they were fakes. (Photos by Suthiwit Chayutworakan)

SAMUT PRAKAN: A lottery retailer has laid a complaint with local police against a man she says claimed a prize with two forged tickets, and then returned later and tried to collect on two more fake tickets.

Aree Kijburi, 52, said a man in his 50s stopped by her lottery stall on Saturday afternoon, wanting to claim 4,000 baht for a two-digit prize in the Sept 16 draw. 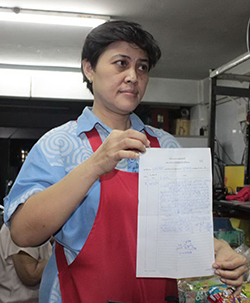 Aree Kijburi shows her report to the police.

Ms Aree said she was not around at the time but her 77-year-old mother checked the tickets the conventional way and handed him 4,000 baht after detecting no irregularities.

The lottery paper is coated with chemicals, and retailers usually use a drop of paint thinner to test it.

She said the same man dropped by again late on Sunday afternoon to once again claim prizes for the Sept 16 draw, claiming to have bought the tickets from a winner.

Her mother verified the tickets by bleaching them with a drop of paint thinner and found them valid. But just as her mother was about to hand him the money Ms Aree arrived and asked to verify the tickets using a mobile app.

Ms Aree said she scanned the QR Code using the app and found no match. The man walked away when she told him the lottery tickets were fake.

She said she did not plan to file a complaint until her mother told her the same man had collected 4,000 baht the previous day. She scanned the QR codes of the two tickets he had previously been paid for, and found they did not match either.

The complaint was lodged with Samrong Tai police in Phra Pradaeng district.