The Royal Crematorium, centrepiece of the ceremonies to take place later this month, rises over Sanam Luang, with Wat Phra Kaeo in the background. (Photo by Pattarapong Chatpattarasill)

Soldiers and police will adopt the strictest security measures during the royal cremation ceremony later this month, officials said, after an intelligence report warned of ill-intentioned groups "in and outside" Thailand planning to disrupt the event.

Deputy Prime Minister Prawit Wongsuwon said Monday the warning was a major concern and he was "worried about all possible incidents".

Authorities have learned of threats inside and outside the country, especially from those who oppose and have negative thoughts about "the [royal] institution", Gen Prawit, also defence minister, said.

The report has prompted the military and police to step up efforts to thwart any attempt to cause disorder during the ceremony on Oct 26 at Sanam Luang, which will be attended by the royal family and is expected to attract up to 250,000 people.

Security at Sanam Luang was raised last year when large numbers of mourners began flocking to pay respects to the late King Rama IX at the nearby Grand Palace.

Security will be at its highest to ensure things go smoothly when Thais bid farewell to their beloved King Bhumibol Adulyadej, the deputy PM said.

"I've ordered authorities to be on maximum alert," Gen Prawit said, stressing "everything must go as planned and safely". 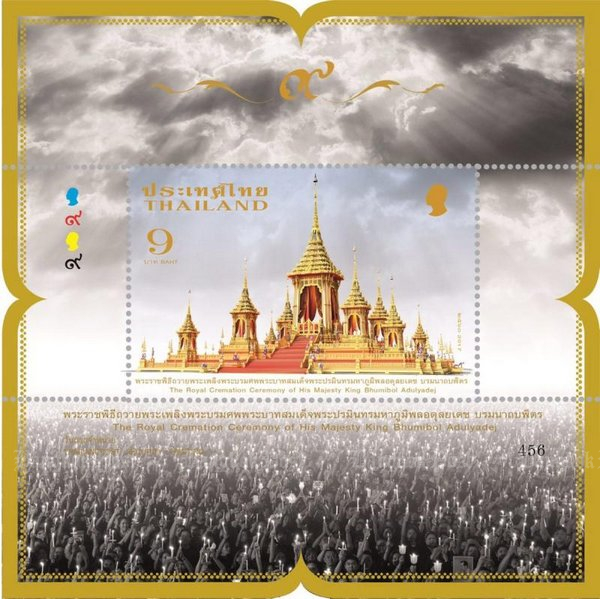 A stamp selling for the symbolic 9 baht will go on sale on World Post Day next Monday, Oct 9.

Also on Monday, Gen Prawit set up a joint operation unit at the Defence Ministry to serve as a focal point working with other agencies on security issues until Oct 30.

It is reported Prime Minister Prayut Chan-o-cha wants him to integrate the work of all security agencies to head off any potential threat.

Army chief Chalermchai Sitthisad refused to elaborate in detail on the supposed threat in the latest intelligence report.

Those involved were among the "regular faces" abroad wanted on lese majeste charges, but who still incite negative feelings towards the monarchy among supporters through social media.

No matter what they think, the people will not let them succeed, he said, encouraging people to be the "eyes" of the government in looking out for anything suspicious.

Fugitive Somsak Jeamteerasakul wrote on Facebook: "The so-called 'underground' red shirt radios [on YouTube] have been instigating their listeners to disrupt the funeral for months now."

Royalist Paiboon Nititawan disagreed saying the government has reliable intelligence and it was good that it has warned the people of possible trouble.

Another lese majeste fugitive, Andrew MacGregor Marshall, said, "I have not heard of any exiled democracy activists discussing plans to disrupt the funeral. Moreover, all the exiled Thai activists I know are totally opposed to disrupting the funeral and disrespecting Thais who wish to pay their respects to their former king."

Pavin Chachavalpongpun, also living in exile and one of those facing lese majeste charges, said, "The cremation provides an opportunity for the security forces to strengthen their position politically using critics of the monarchy as an excuse to increase the state's heavy handed policy to control society more tightly," he said.

"Critics of the monarchy hardly pose a threat considering how much they have been suppressed since the coup," he said.