Floods likely in provinces but not Bangkok
Thailand
General

Floods likely in provinces but not Bangkok

The government on Tuesday increased discharges from dams in the Central Plains and the Northeast and warned people in low-lying areas in the regions of upcoming floods while Bangkok remained safe despite concerns.

Prime Minister Prayut Chan-o-cha said floods were likely in many areas including the Chao Phraya River basin as Thailand was a low-lying country and rain and storms were forecast.

"Everyone must be prepared for the water... We are trying to minimise damage," he said.

Agriculture and Cooperatives Minister Chatchai Sarikulya said major dams in the country were 79% full and continuous rain was posing risks of floods, especially in the Chao Phraya River basin and the Northeast.

Dams in the Northeast and the Chao Phraya River basin were nearly full and officials were accelerating discharges and trying to quickly drain water through main waterways and divert excess water to low-lying paddy fields, he said.

According to him, areas without floodwalls from Ayutthaya province downstream to Bangkok will be flooded but the situation will not be critical given the present flow rate of the Chao Phraya River.

If it does not rain too much on Oct 12-14, flooding would be manageable, Gen Chatchai said.

In Ayutthaya on Tuesday, the level of the Chao Phraya River was one metre above the ground of ancient Wat Chaiwatthanaram protected by floodwalls in Phra Nakhon Si Ayutthaya district.

Communities and temples in the province's low-lying district of Bang Ban were 1.5m underwater as discharges were rising from the Chao Phraya dam in Chai Nat province.

The current of the same river was eroding 1km-long section of a riverside road in Nakhon Sawan's Phayuha Khiri district and overflowing in Chai Nat's Manorom district.

The Yom River was overflowing in Pho Prathap Chang district of Phichit province.

The Kwai Noi Bamrung Dan dam in Phitsanulok province and the Ubonrat dam in Khon Kaen province were full and their discharges were increasing and posing flood threats in areas downstream. 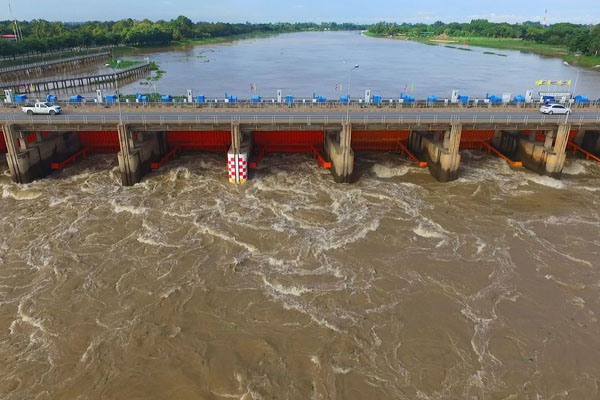 The discharge rate at the Chao Phraya dam in Chai Nat province rose from 2,000 cu m/s on Monday to 2,188 cu m/s on Tuesday. (Photo by Chudate Seehawong)

The State Railway of Thailand (SRT) has submitted a revised plan to develop more than 50,000 square metres of space at Bang Sue Grand Station and 12 Red Line stations for commercial use.

A recent survey conducted by a faction led by the secretary-general of the ruling Palang Pracharath Party shows the popularity of some MPs in the South has declined.