The first batch of 28 VT4 tanks, better known as Main Battle Tanks (MBT3000) arrived on Tuesday at the navy's port at Sattahip in Chon Buri province. After inspection, they will be moved to the Army Cavalry Centre at Adisorn military camp in Saraburi for further checks, before final assignment at the 3rd Cavalry Division. (Photos Twitter/@wassanananuam)

The first batch of 28 VT4 tanks bought for 4.9 billion baht from China has arrived in Thailand, according to the army.

They were transported by 12 ships to the Royal Thai Navy's Thung Prong port in Chon Buri's Sattahip district on Monday, where they were ferried further to the Royal Thai Army Cavalry Centre at Adisorn military camp in Saraburi for inspection by an army-installed panel.

The 28 tanks will then be commissioned at the 3rd Cavalry Division at the Prem Tinsulanonda Military Camp in Khon Kaen's Nam Phong district, a source said.

Army chief Chalermchai Sitthisad said that once the inspection is completed, the army will invite the media to see the tanks.

He noted the procurement was decided by an army committee, whose members earlier travelled to China to see the tanks being tested. 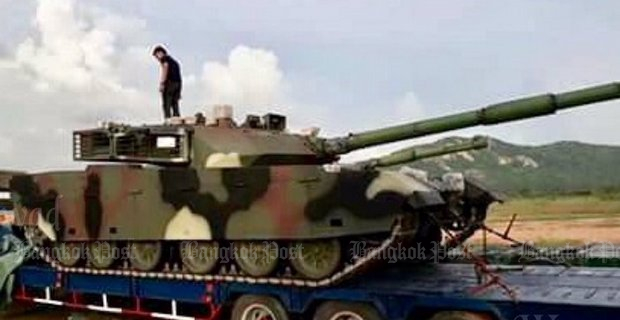 The 28 tanks that arrived Monday were purchased from China for ฿4.9 billion, and will be supplemented next year with 21 others at a cost of 4 billion.

The purchase of the Chinese-made tanks came after Ukraine failed to delivered Oplot T-84 tanks as promised following the country's domestic problems, according to an army source. Only 10 Ukrainian tanks have been sent to Thailand over the past three years and they are now kept at the 2nd Infantry Division in Sa Kaeo province.

The procurement of the 28 Chi­nese-made tanks was approved early last year. The purchase of another 11 tanks, worth two billion baht, was given the green light in the middle of the year. The final 10-tank batch costing two billion baht has yet to be proposed for cabinet approval.

The source said the army decided to buy the Chinese tanks because the Thai and Chinese defence authorities plan set up a military hardware repair facility in Thailand in the future. The army also plans to buy VN1 armoured vehicles from China, the source added.

The procurement is also due the close ties between the Thai and Chinese armed forces, the source said.