The abandoned police pickup truck after it was swamped by a flash flood while police were taking a murder suspect out of the forest after capturing him in Kanchanaburi's Sai Yok district on Wednesday afternoon. (Photo supplied by Pol Col Thanee Sa-nguanjeen)

KANCHANABURI: Police chased a murder suspect into the jungle and arrested him, and then they all nearly drowned on the way out when a flash flood swept over their vehicle in Sai Yok district on Wednesday.

Udom Meksamlee, 37, was apprehended in the Wang Yai and Mae Nam Noi national forest reserve on Wednesday afternoon, after being hunted down by a team of police.

The suspect allegedly gunned down Panya Sermsuk, 46, at a house in tambon Bongtee in Sai Yok district on the night of Oct 9.

The victim's wife, Thian Naranram, told police her husband was killed by Mr Udom, who was his brother-in-law and lived next door. After a quarrel with Panya an angry Mr Udom had left, but returned to their house that night with a shotgun.

Mrs Thian said Mr Udom shot Panya in the chest in front of her. Her husband was taken to a local hospital, but died shortly after.

The suspect fled into the jungle along the Thai-Myanmar border, but was caught in the national forest reserve on Wednesday afternoon, said Pol Col Thanee Sa-nguanjeen, chief of Sai Yok police station.

However, police and the suspect almost drowned on the way back from the forest.

As the pickup truck carrying arresting police and the suspect was crossing Wayor creek inside the forest reserve a flash flood swept down the mountain, quickly swamping the vehicle.

As the water rose around them, police quickly abandoned the truck, taking the suspect with them, before it was swept away.

They all made it safely to the creek bank, and called for help.

More police were sent to the scene take the suspect to the police station and to help retrieve the pickup   from the creek. 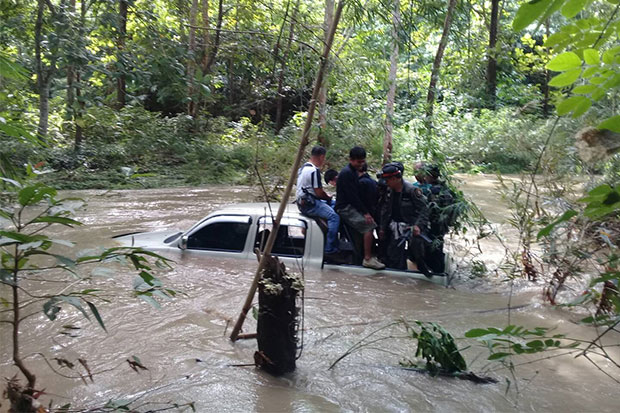 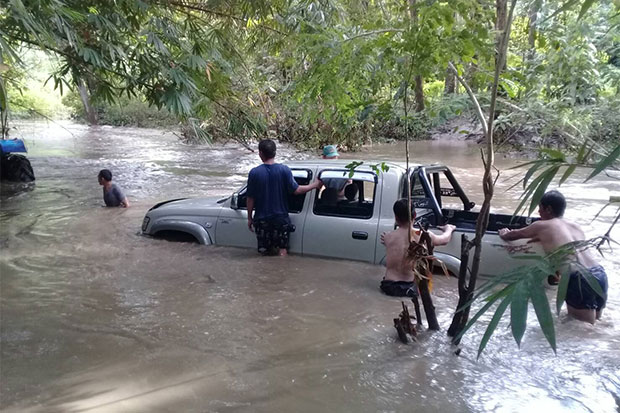