A view from a drone of Chai Nat province's Sapphaya district shows houses submerged in flood water after the Chao Phraya barrage dam in the Central Plains province accelerated water discharge. (Photo by Chudet Sihawong) (NOTE: To see this photo in full colour, press the "Switch colour tone" button at the bottom right of the browser window)

The Bangkok Metropolitan Administration (BMA) plans to set up operation centres in flood-prone areas so that help can be provided to victims without delay.

Deputy Bangkok governor Jakkapan Phiewngam said officials will be on standby around the clock at the centres.

Wongduan Ong-laor, 52, said she was concerned about the safety of her disabled father, 80, as the water had nearly reached the first floor of her brother's house, where her father lives. She said she had to paddle to the house to take care of her father during the day before her brother took his turn in the evening.

On Sunday, Ang Thong governor Weerawut Putrasreni delivered necessities to Ms Wongduan. He said he had contacted Disaster Prevention and Mitigation Centre 16 in Chai Nat to provide a makeshift tent for her.

Their hardship came after the Chao Phraya River overflow swamped more than 2,300 houses in seven tambons of the district.

In Pathum Thani, the rising Chao Phraya River caused water to flood riverside roads near Siriwattana Market in Muang district. Water pumps were deployed there to siphon the water back to the river.

Kwanjai Somboon, a 52-year-old grocer, said water seeped out of her building's ground floor, which she needed to pump out.

Wisan Wasuntharapon, chief of the Nakhon Sawan Provincial Irrigation Office, said runoff from the northern region continues to flow into Nakhon Sawan at an average speed of 2,700 cubic metres of water per second.

Accordingly, the level of the Chao Phraya is rising and affecting low-lying areas on the banks of the river.

However, it is highly unlikely that this year's deluge will cause a disaster comparable to the floods of 2011, he said. 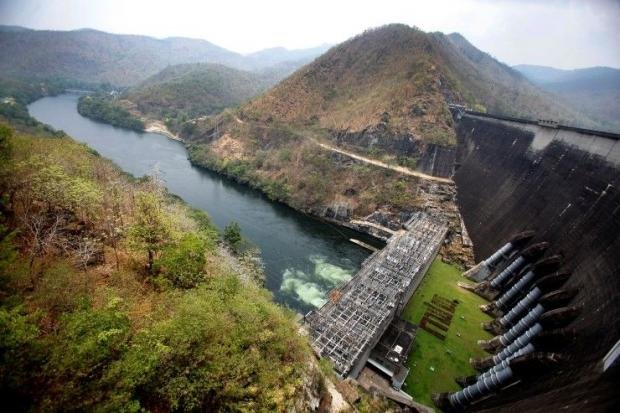 Egat has been forced to deny social media rumours that the Bhumibol and Sirikit (above) dams are overflowing. The energy agency says the Bhumibol Dam as of Saturday was filled to 69% of capacity, while the Sirikit Dam is at 84%, and both dams have stopped discharging water at all. (Photo courtesy Egat)

Somkiat Prajamwong, director-general of the Royal Irrigation Department, said the Bhumibol dam in Tak and the Sirikit dam in Uttaradit have stopped discharging water as they need to hold water for use in the dry season, which is just around the corner.

Meanwhile, in Khon Kaen, the Pong River burst its banks and swamped several villages in tambon Phralap and Bueng Neam of Muang district, while the Ubonrat dam began to increase its water discharge rate Sunday due to overcapacity.

In Ban Pheu of tambon Phralap, 150 houses and more than 5,000 rai of rice fields were inundated.

Persistent downpours in the South have triggered runoff from Pato Mountain, swamping parts of Highway 4006 between Chumphon's Lang Suan district and Ranong on Sunday. Only one lane of the road remained useable by motorists.