An artist's impression of a stretch of the proposed rail link between the three international airports in Bangkok, Samut Prakan and Rayong. (Photo by Chaiyot Phupattanapong)

There has been no public opposition at hearings on a planned high-speed railway linking three international airports - Don Mueang, Suvarnabhumi and U-tapao, according to the project manager.

The 200 billion baht project is part of plan to establish transport links across the Eastern Economic Corridor (EEC) by connecting Don Mueang airport in Bangkok, Suvarnabhumi airport in Samut Prakan and U-tapao airport in Rayong.

Project manager Sayant Iamsom-somboon said on Tuesday more than 160,000 passengers were expected to use the service each day.

The State Rail of Thailand, the operator, estimated that at least 103,920 people would use the City Line route from Don Mueang in Bangkok to Suvarnabhumi in Samut Prakan daily, he said.

The high-speed route from Suvarnabhumi to Rayong is expected to carry about 65,630 passengers per day.

According to Mr Sayant, there was no opposition from people along the planned corridors during recent public hearings organised by the SRT. The most recent was on Monday.

However, people did ask that measures be put in place to control dust and walls of sound absorbing materials be built to reduce noise pollution.

The 260km Bangkok-Rayong railway will run from Bangkok through Samut Prakan, Chachoengsao and Chon Buri and terminate at Rayong.

There will be 10 stations along the route. Eight will be elevated -- Don Mueang, Bang Sue, Makkasan,  Chachoengsao, Chon Buri, Sri Racha, Pattaya and Rayong.

Suvarnabhumi and U-tapao stations will be underground, Mr Sayant said. 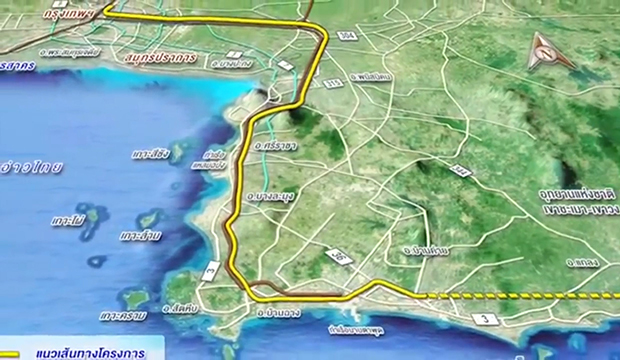 A map of the proposed route from Bangkok to Rayong.