Songkran Chaiyasin, 41, formerly a deputy abbot in Udon Thani, holds an axe, demonstrating how he used it, during the crime re-enactment in the temple's living quarters in this northeastern province on Tuesday. (Photo by Yutthapong Kumnodnae)

UDON THANI: A deputy abbot arrested for the axe murder of a cattle raiser confessed to police he killed him in a rage after the man demanded actual payment for a fighting cock he had bought from him and eaten.

During police interrogation, Songkran Chaiyasin, 41, said on Tuesday he had acted alone in the murder of Wicharn Prommin.

He had bought a fighting cock from the man, who priced it at 500 baht, and had then boiled and eaten it. He became extremely angry when Wicharn later demanded the money for the bird.

Mr Songkran was formerly Phra Songkran Porisuttho, deputy abbot of Wat Sri Boonruang temple in tambon Nong Sung of Muang district. He was expelled from the monkhood after being arrested for the murder in Pattaya, Chon Buri, on Monday and returned to Udon Thani.

He fled the temple shortly after Wicharn was killed.

The body of Wicharn, 44, a cattle raiser in the tambon, was exhumed from a hastily dug grave in the compound of the temple on Monday. The victim had multiple wounds to his neck, head and torso.

A former novice who witnessed the axe murder pointed the finger at the former deputy abbot. He said Mr Songkran had been drinking with two assistants in the temple's living quarters when Wicharn approached him.

The novice alleged he was made to help bury the body. He hastily left the temple the following day and told his bother, who took him to the police.

Mr Songkran was taken back to Wat Sri Boonruang in Udon Thani for a crime re-enactment on Tuesday.

About 200 police commandos were deployed there to ensure peace and order as around 500 angry local residents flocked to the scene. The people loudly abused and scolded the suspect, with some calling down curses on him.

He was taken to the dug up grave and to the septic tank behind his living quarters that he threw the axe into after allegedly killing Wicharn with it.

Afterwards, he was whisked away and taken to the police station in Muang district.

Pensri Chaisri, 54, a relative of the victim, said the suspect's actions were totally unacceptable. He had committed a brutal murder while wearing a saffron robe. He also drank alcohol, and was not worthy of the robe.

She and other relatives had gone to the temple when looking for Wicharn after he vanished. There they met Mr Songkran, who was still deputy abbot at the time. He had pretended ignorance, asking if they had found him yet, Ms Pensri said.

The suspect had continued to perform religious activities after the murder, fleeing only after he was implicatad in it, she said -- and demanded that he be executed. 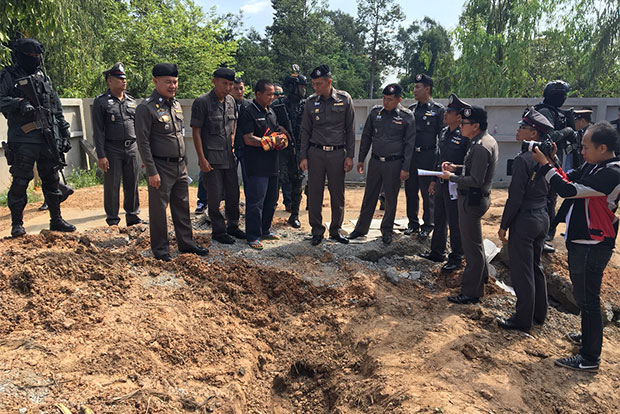 The murder suspect is taken to the dug up grave where Wicharn's body was found in the compound of the temple in Udon Thani on Tuesday. (Photo by Yutthapong Kumnodnae) 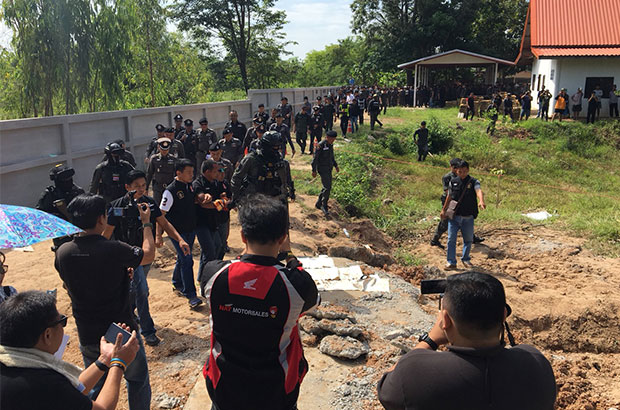