A Japanese woman aged 22 was arrested for allegedly trying to smuggle 10 baby otters out of the country. She claimed she did so out of sympathy with the animals.

Don Muang police questioned Kaede Yamaguchi on Tuesday after she had been arrested with the animals in her suitcase in the departure terminal of Don Mueang airport at about 10.15pm Sunday.

The arrest followed her request at an AirAsia X check-in counter to load the black suitcase aboard flight XJ600 destined for Narita. Wildlife officials at the airport found the 10 otters in a basket hidden in the suitcase.

The officer quoted her as saying she sympathised with the baby otters a vendor placed for sale at the Chatuchak market so she bought 10 of them at 1,000 baht each. She said she intended to raise them in Japan and was unaware it was illegal.

She was charged with unauthorised possession of protected wildlife. 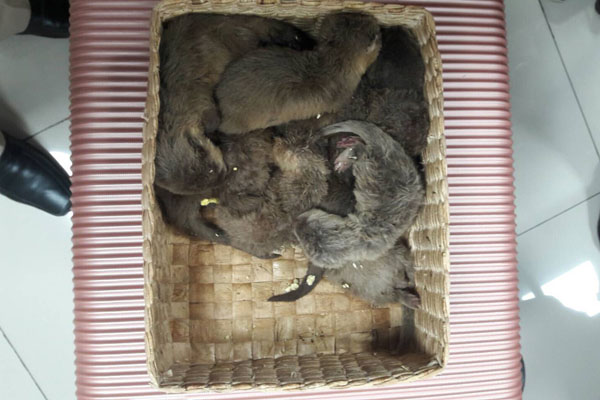 Baby otters seized from the suspect.