Police question Jeerawat Singtor, 33, and his wife Khanuengnit Noppakhun, arrested after more than 500,000 methamphetamine pills were found in a rice barn at their house in Phitsanulok province on Thursday. (Photo by Chinnawat Singha)

A couple believed to be major drug traffickers in the lower North were arrested after more than 500,000 methamphetamine pills were found hidden in a rice barn at their house in Phrom Phiram district.

Jeerawat Singtor, 33, and his wife Khanuengnit Noppakhun, 24, were apprehended and 530,149 speed pills and a pickup truck seized during a raid on their house in Phrom Phiram district on Thursday, Pol Maj Gen Panu Buranasiri, chief investigator of Provincial Police Region 6, told a media briefing on Friday.

When raided, the suspects were caught working on the accounts of their illicit trade, which involved 50 dealers.  A search found the drugs hidden in a rice barn in the grounds of the property.

The couple told police they had received one million speed pills from the two men and had distributed about half of them to their network of dealers in other provinces, Pol Maj Gen Panu said.

Police initially charged them with illegal possession of methamphetamine with intent to sell. The investigation would be extended to arrest the remaining network members, he said.

The raid followed the arrest of drug suspect Natthawut Srathongyoo, who was caught in possession of meth pills, crystal methamphetamine, a pistol and 25 bullets at a love motel in Muang district of the province in April. Information he gave police eventually led to Thursday's raid. 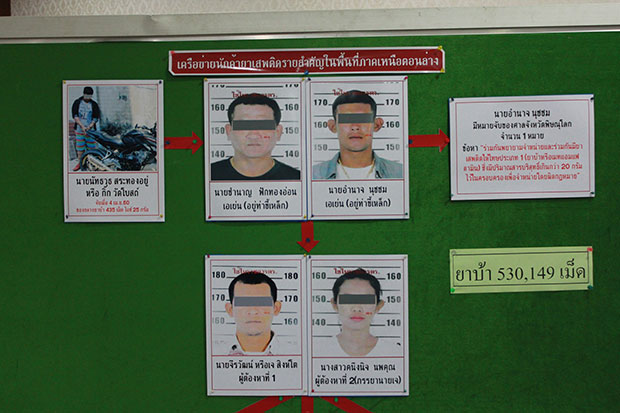 Alleged members of the couple's drug network in the lower North. (Photo by Chinnawat Singha) 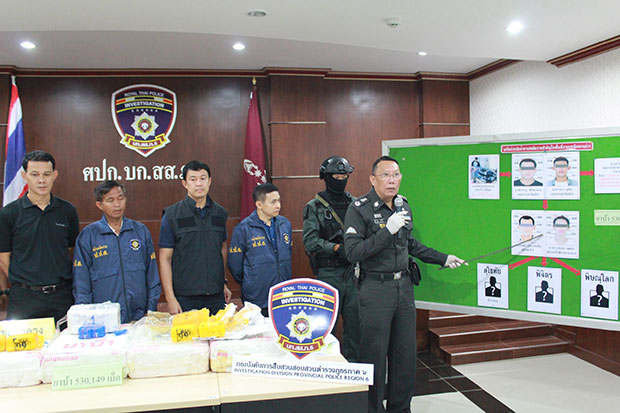 Pol Maj Gen Panu Buranasiri, chief investigator at Provincial Police Region 6, explains the drug trafficking network in the lower North at Friday's news conference, following the arrest on Thursday of two people and the seizure of more than 500,000 speed pills at their house in Phitsanulok province.   (Photo by Chinnawat Singha)