A few of the traditional southern coconut graters brought together for use in preparing food at the funeral of a well-known figure in Songkhla province, in a bid to preserve the traditional way of cooking with coconut as a main ingredient. (Photos by Assawin Pakkawan)

SONGKHLA: Because coconut is a main ingredient in most southern Thai dishes, a handmade coconut grater has long been an important cooking utensil in most kitchens in the South.

An event at a Buddhist temple in a village in Songkhla’s Ranot district on Monday provided clear evidence of the continuing popularity of coconut graters "with a difference" in this region of the country.

Close to a hundred traditional coconut graters were brought together for the prepartion of food at the funeral of Suchol Klaeothanong, 85, the late well-respected former kamnan of tambon Ta Khria.

His son is Kraithanu Klaeothanong, a member of the Songkhla provincial administration organisation. (continues below) 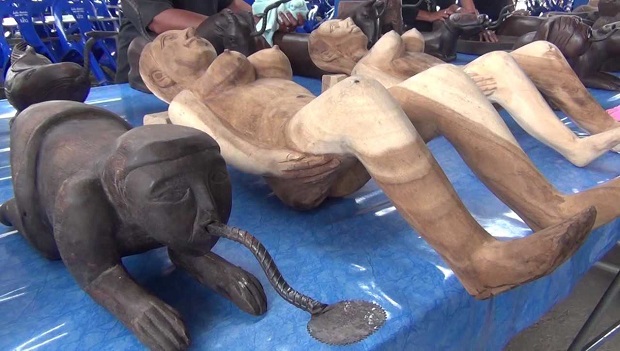 Among the various coconut graters on show were these two mythical female figures. (Photo by Assawin Pakkawan)

Because the late kamnan was so well known his funeral attracted an extraordinary number of guests and a large amount of freshly cooked food was needed to serve them.

The coconut graters on show were not your ordinary-looking cooking utensils. They came in various shapes - from common animal figures to mythical characters. They were made mainly of carved wood to which was attached a flat metal blade that is used to grate the coconut meat from the shell. The person can sit on the wooden body while grating the coconut.

Mr Kraithanu said he still has memories of when he was very young and not a single kitchen in the neighbourhood had an electric appliance for grating coconuts. (continues below) 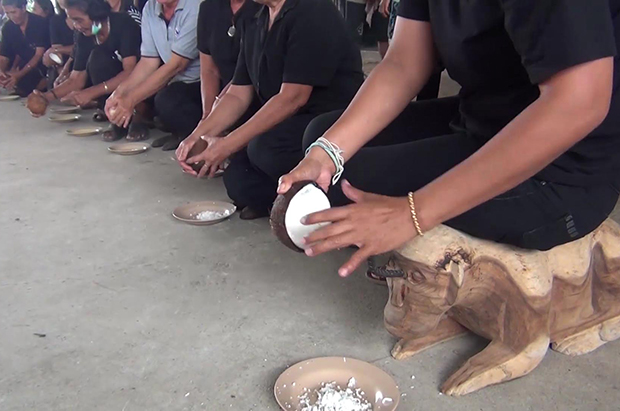 Grating coconut from the shell, the traditional way. (Photo by Assawin Pakkawan)

They all used traditional, manual coconut graters like these, he said. It was his intention to foster the preservation of the custom, and so he encouraged people to bring theirs along for use at his father's funeral.

The graters are grouped for different uses, based on the number of teeth on the blade.

Those with three and six jagged edges are normally used for grating coconut for use in traditional desserts; those with 10 are used for preparing dishes that need cooking. 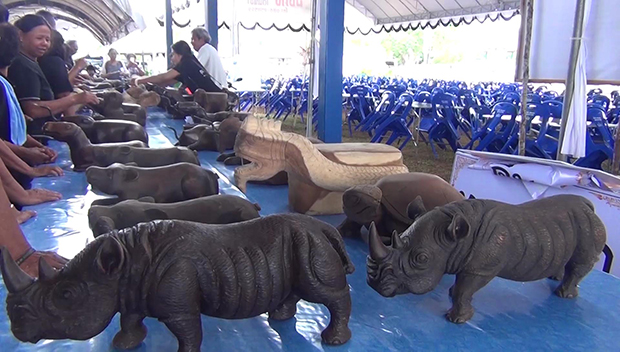 Traditional coconut graters in many sizes and shapes, brought together for use at the funeral. (Photo by Assawin Pakkawan)