Blankets and bed sheets with fake brandnames such as Hello Kitty and Spiderman with a face value of over 3 million baht, are found at Namphet godown, rented by a Chinese national, in Aranyaprathet district, Sa Kaeo on Wednesday. (Photo by Sawat Ketngam)

SA KAEO: Fake brand-name blankets and bed sheets worth over 3 million baht were seized from a godown rented by a Chinese national near the Rong Kluea border market in Aranyaprathet.

A combined team of customs officials, police and soldiers raided Namphet godown, in tambon Parai, of this border district on Wednesday evening, acting on information that a large amount of pirated products were stored there.

The godown is one of 30 godowns located about one kilometre from the Rong Kluea market. During the search, the officers found many blankets and bed sheets bearing fake brand names such as Hello Kitty, Superman and Spiderman,. and other pirated items carrying logos of international football clubs.

Those items were found packed in 39 large sacks and 36 cardboard boxes inside the godown. There were no importation documents or tax payment receipts for the goods. Nobody came forward to claim ownership of them.

A caretaker of the godown told officials a Chinese national had rented the godown to store his goods. He did not know what kind of goods. The Chinese man could not be contacted and was believed to have left for China.

Authorities believed the Chinese man was a trader and had smuggled the pirated goods for sale at the border market during the cold season. 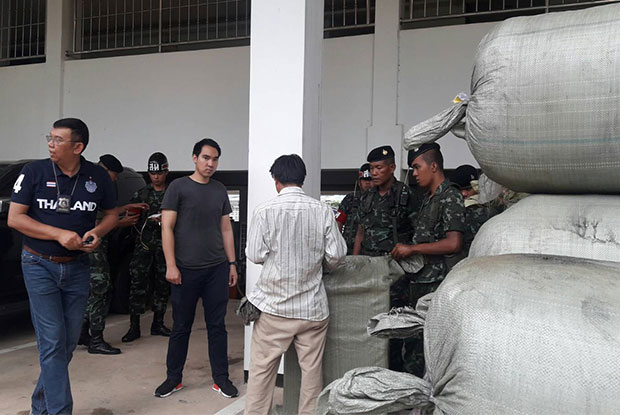 Many large sacks containing pirated products seized during a raid on a godown near Rong Kluea border market in Sa Kaeo on Wednesday. (Photo by Sawat Ketngam)