Abortion paraphernalia and pills seized from an alleged abortion clinic, shown at a police news briefing in Nakhon Ratchasima. (Photo by Prasit Tangprasert)

NAKHON RATCHASIMA: A nurse has been arrested for allegedly running an illegal private abortion clinic in Muang district.

The suspect was identified as Suwanna Kaewsawang, 56, who previously worked as a nurse at private  hospitals in the district.

She was apprehended at her room at a national public housing apartment in tambon Nong Chabok around 9.30pm on Thursday.

Abortion paraphernalia and pills were impounded from her room.

The raid was jointly launched by police from the intellectual property enforcement centre and Provincial Police Region 3, which supervises the Northeast, after a suspect detained earlier for selling abortion pills alleged they were purchased from Ms Suwanna.

A female plainclothes officer then posed as a pregnant woman who wanted an abortion, which was priced  around 7,000 baht.

Ms Suwanna took the officer to her room, which was equipprd as an illegal abortion clinic. Police then arrested her. (continues below) 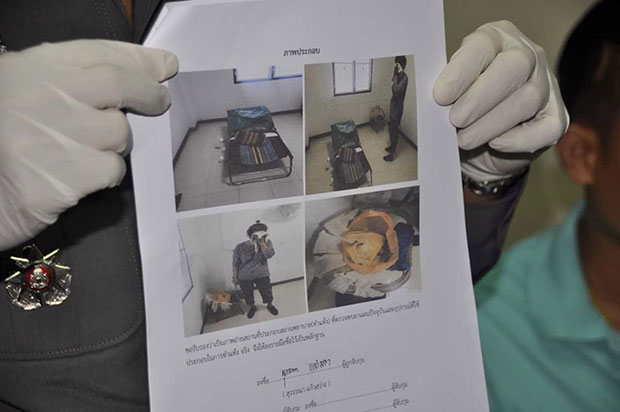 Police show photos of  the apartment room allegedly usd as an illegal abortion clinic by a nurse. (Photo by Prasit Tangprasert)

According to police investigators, Ms Suwanna confessed she had induced abortions in over 100 women, many of them university students.

She had trained as a nurse and worked at several private hospitals in the province before resigning to run her own clinic.

Customers were charged between 5,000 and 45,000 baht, depending on how advanced their pregnancy.

Police said Ms Suwanna will be charged with running an unauthorised sanatorium, running a medical profession without registration or licence, and selling medication without a permit.

She was arrested for a similar offence 10 years ago, according to police. The case went to court and she was acquitted.