An official shows some of the royal cremation commemorative pins, suspected to be illegally produced, seized at the Chayatham Co factory in Bangkok's Lat Phrao district on Friday morning. (Supplied photo)

A factory owner and about 10 employees were detained and many pins commemorating the royal cremation of King Rama IX seized during a raid in Bangkok’s Lat Phrao district on Friday morning.

Palangwat Thanakichayachat, alias Hia Kaew, admitted to being the owner of the firm. He and his employees were held for further questioning.

Thatsanee Horcharaskul, the owner of Ngern Thong shop, denied making them herself and told police she was not aware they were not legitimate. They reportedly were selling for 120 baht.

Investigators determined that Ms Thatsanee obtained them from Chayatham Co.

Authorities would find out whether these items were produced with permission or not,  and whether the factory was operating legally.

Police would also investigate where the commemorative pins and coins were sold.

The factory employs 30-40 immigrant workers, Pol Col Maitree said. They would find out if they had work permits or not.

Mr Palangwat claimed a person working at the Office of the Permanent Secretary for the Prime Minister's Office had contacted him to produce commemorative items.

He had produced samples of 4 or 5 types for that person to see first. He said his factory was producing 700-800 pieces. The order was not yet completed. He had started making them 4 or 5 days ago, and had not sold any of them.

He said he had no knowledge of the shop where the reported fake pins were earlier seized.

Genuine royal cremation commemorative pins cost 300 baht and can be ordered through post offices for delivery in 30 days.  There are no limits on the number that can be ordered. 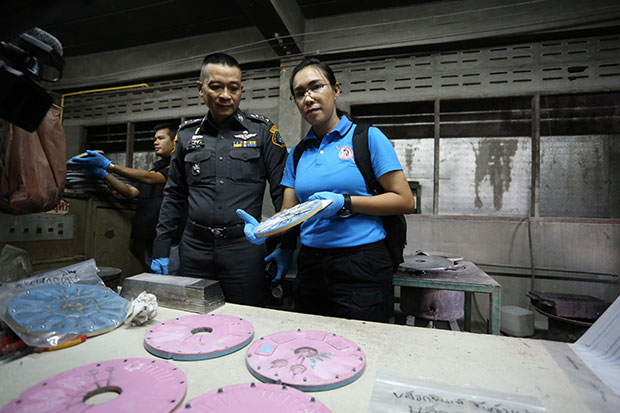 Officials show moulds for the pins found at the factory. (Supplied photo)