Workers have drained water from Hua Hin after a downpour flooded the resort town and temporarily blocked roads and the southern railway.

Officials from the Disaster Mitigation and Prevention office on Tuesday installed more pumps to drain water from the resort town.

Department chief Kittiporn Thepyuamnuay said about 300 houses in a low area in the municipality had been evacuated as the water was up to two metres high.

Around 400m of the southern train line in the resort town remained flooded. The section was between Khao Tao station in Hua Hin and Wang Pong station in Pranburi.

The southern track later reopened and the State Railway of Thailand is still closely monitoring the flooding situation in the area, the railway agency said.

The downpour forced the Pala-u Waterfall in Hua Hin to close on Tuesday.

The Meteorological Department still warned of more rain and possible flash flood in Prachuap Khiri Khan and 13 other provinces including Greater Bangkok due to tropical storm Kirogi. 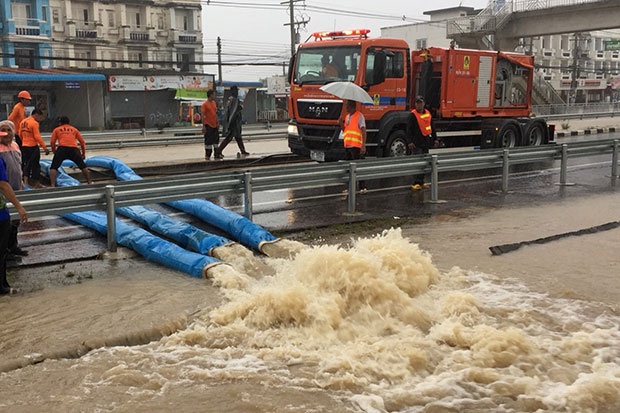 Water is drained in Hua Hin district in Prachuap Khiri Khan on Tuesday after the resort town was flooded following a downpour. (Photo by Chaiwat Satyaem)