Residents of Phetchaburi's Muang district wade through thigh-deep floodwater outside the Big C store on Phetkasem Road on Thursday. (Photo by Chaiwat Satyaem)

PHETCHABURI: The Phetchaburi river has burst its banks, overflowing into the municipal area, wreaking havoc in the township and flooding the major highway linking to the southern region.

People were wading thigh deep through floodwater in Muang district on Thursday after heavy rain brought by storm Kirogi.

Schools and government offices in the district were inundated. The overflow spilled onto Phetkasem Road, causing a traffic jam for about four kilometres on the Bangkok-bound lanes between Ban Lat and Muang districts, with water up to 60 centimetres deep. In some areas of the municipality the floodwater was 40cm deep.

The province advised people to evacuate to high ground as water continued to ovrflow from the river, which passes through the city centre.

Phetchaburi governor Chatporn Ratdusadee said work crews were battling to drain the flood to the river downstream. It was hoped to end the crisis in three days.

The Disaster Prevention and Mitigation Department reported floods in Ban Laem, Cha-am and Tha Yang districts of the province.

The storm has brought downpours to southern provinces since Wednesday night, with gusting winds in Narathiwat that felled trees in Muang district. (continues below) 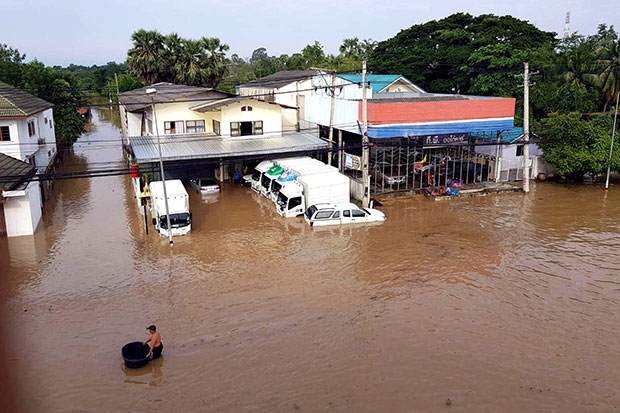 Houses and vehicles in Nuang district of Phetchaburi, flooded by overflow from the strom swollen Phetchaburi River on Thursday. (Photo by Chaiwat Satyaem)

The Meteorological Department warned of more rain and possible flash floods in 11 southern provinces until next Tuesday.

Phayao Muangngam, the director of the weather forecast office on the Andaman Coast, identified Surat Thani, Nakhon Si Thammarat, Phatthalung, Songkhla, Pattani, Yala and Narathiwat as the most threatened areas.