Two weeks ago, the general prime minister warned "anti-coup elements" he was on to them. Last week, he told the media to stop annoying him. Two days later, he showed brand new fangs.

When Gen Prayut and underlings announced with straight faces the huge threats to his government from foreign and domestic critics, the proper response seemed to be either derision or cynicism at a new excuse for delaying elections. Or both.

Since May 22, 2014, lashing out at the media has been pretty much another way of saying "it must be Tuesday". Last week, the targets were those semi-subversives and smart-mouths at Voice TV. 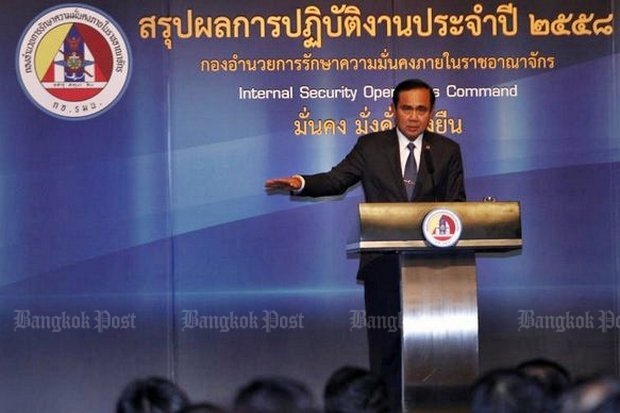 The general prime minister has awarded an Isoc security unit to every province to deal with problems arising from all the political threats to the government at present. (Bangkok Post file photo)

It wasn't the first time for the station's news team to be standing in front of the desk of the nation's headmaster. In a way it was even entertaining. Our leader: "The people at Voice TV are my dear friends, I always remember them. That channel blesses me every day."

And also: "I don't want to bully anyone. But if you damage the country ..."

We've been there before. It's informative for the country to see the prime minister pour out his soul, almost as informative as it is excruciating for media members to be singled out. It is as much the duty of a news scribbler to get the evil glare and unkind words as it is the duty of the general prime minister and staff to shoot messengers. In both cases, it's part of the job.

And it's been going on for three years, six months, four days and several hours -- invitations to coffee, attitude adjustment sessions, suggestions to cool the criticism of Thailand's leading man.

But on Wednesday it all changed. An item in the Royal Gazette indicated that this time he and his very close circle are about to get serious.

You may have thought that Section 44 was dumped when you voted for a constitution last year. It's still there, except it's called Section 265, a paragraph so powerful it can perform either good or evil.

The new Section 44 decree published midweek set up what Gen Prayut labelled a "security superboard", and it will be run by the extremely non-traditional, always unpredictable and occasionally highly strung Internal Security Operations Command (Isoc).

In the past, Isoc was a rather special, often spooky group used for special jobs including "wet work". Since the coup, the general prime minister has not only revived but hugely expanded the command to the point old hands wouldn't recognise it.

Before the prime minister got out his Section 44 pen yet again, he had handed to Isoc the responsibility for all activities in the deep South. Even that was unprecedented. It stripped out the special civilian organs and left Isoc in charge of everything, from the low-intensity war to the lucrative drug trade, from human trafficking to dependably profitable gun-running.

With Isoc now in charge of all security, all the time, all over, there's a Butch Cassidy moment here. "Sundance, who are those guys?" It should be noted, then, that the head of Isoc is a former commander-in-chief of the Royal Thai Army, a man by the name of Prayut Chan-o-cha.

Isoc, as a group and right down to the individual patriot, was morose and almost traumatised at suggestions it will be yet another nail in democracy's coffin and a further guarantee that votes will go the green shirts' way if the army ever decides to hold an election. No way, explained Maj Gen Peerawach Saengthong.

Look, explained the two-star spokes­- man as he recovered from his shock over suspicions of Isoc motives. "There's no politics to see here. Our provincial units will be headed by Isoc provincial directors, who double as provincial governors." Well, all right, then.

No other country in the world can claim that every one of its province/state chiefs is also a military spook. Of course the beauty of that is in the eyes of the beer holder, but you can't deny the uniqueness.

But then expect Thailand to always be different from the rest of the world, because Thailand is the very last country still run by a military dictatorsh ... er, the National Council for Peace and Order.

The last previous successful military coup was in 2006 in Fiji, and they are back to elected government. The last coup attempt was 16 months ago in Turkey, and it failed.

Just think; it used to be so fashionable to have a military regime. Now we march, literally, alone and to a different army drummer.