A wind turbine tower on the sunken barge barely shows above water, in the Chao Phraya River, Pathum Thani, on Tuesday morning. (Photo by Wichan Charoenkiatpakul)

PATHUM THANI: Salvage experts are planning how best to raise a large barge and its cargo of wind turbine towers that sank in the Chao Phraya River, about 300 metres from the Nuan Chawi Bridge, in Muang district on Monday afternoon.

It sank around 3pm on Monday, local media reported. 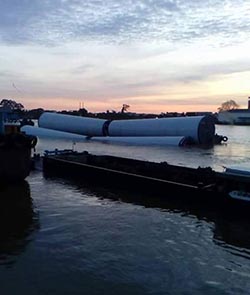 Marine investigators said water had been pumped into the hold as extra ballast, to lower its profile significantly so it could pass under the bridge during a high tide. It became unstable, sank and settled on the bottom. Only a small part of the superstructure and cargo remain above water.

There were no injuries reported.

Mr Somkiat said it would take sometime to plan the recovery of the barge and the turbine towers because of their large size.

The sunken vessel and cargo had been clearly marked out, and other vessels were still able to travel the river.