Immigration police arrested two US citizens at Don Mueang airport Tuesday night on warrants that charged they posed for pictures showing their naked bottoms at Wat Arun (Temple of Dawn).

Pol Col Choengron Rimpadee, deputy spokesman of immigration police, said the Americans were arrested at the airport at about 8pm while they were trying to depart the country.

He identified them only as Joseph and Travis, both aged 38.

The spokesman said the pair admitted to taking down their pants and posing for photos at the temple. They were brought to the Bangkok Yai police station for legal action.

They were charged with getting naked in public. The offence violates criminal law and is liable to a fine of up to 5,000 baht.

The Americans were detained at the police station in order to be brought to court.

Tourists should have respect for places of cultural, historical and religious importance because it is simple good manners, Pol Col Choengron said. 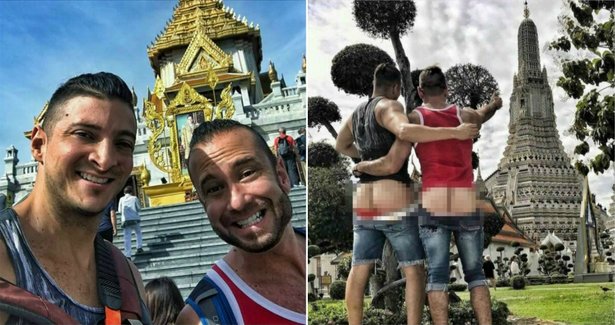