Firefighters try to douse the blaze that broke out at a bicycle warehouse in Bang Pakong district of Chachoengsao early Saturday. Nobody was injured, but the fire caused about 30 million baht in damage. (Photo by Sonthanaporn Inchan)

CHACHOENGSAO: A fire gutted a large bicycle warehouse in Bang Pakong district early Saturday, destroying about 50,000 bikes and parts with damage of at least 30 million baht.

More than 40 fire trucks and firefighters from stations in Chachoengsao and nearby Chon Buri were deployed to the scene to douse the flames as they raged through the two-storey complex, which also housed the company's offices.

At least 50,000 bicycles as well as thousands of spare parts were kept inside the fire-gutted warehouse. It took more than three hours to put out the blaze but nobody was injured, said police.

A security guard identified only as Nath told police that he and his 16-year-old son were sleeping in a room on the north side of the warehouse when a loud bang woke them. They rushed out to check and saw flames on the first floor that were spreading quickly to the upper floor.

The pair carried buckets of water but were unable to put out the flames. Mr Nath then called the fire-control unit of a nearby power plant, about 800 metres from the warehouse. However, he was told that approval was needed before trucks could be deployed.

He then alerted other emergency units for help. Trucks and crews from several local administrative organisations responded and brought the fire under control by 3.30am. By that time, however, the entire warehouse had been destroyed.

Pol Lt Col Ekkasit Vorakitthakorn, crime suppression chief at the Bang Pakong police station, said the cause of the fire was not yet known. Forensic officials will be asked to investigate.

Thai media reported that the fire caused about 30 million baht in damage.

Chachoengsao governor Suwit Khamdee on Saturday said the warehouse, located on a five-rai land plot, was not near any communities or houses.

He has assigned the provincial labour office to provide assistance to the company's 300 workers, as all goods and machinery kept at the warehouse have been destroyed.

The governor later inspected the production factory of the bicycle company, located about 3 km from the warehouse. An initial inspection dound that some equipment, machinery and electrical wires were old and could pose a fire risk.

He has ordered the provincial industry office to inspect the factory to see whether its production and safety measures met standards. 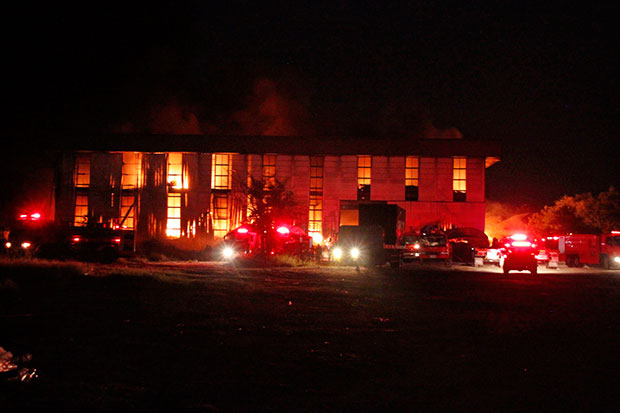 More than 40 fire trucks and crews tried to bring the warehouse blaze under control. (Photo by Sonthanaporn Inchan) 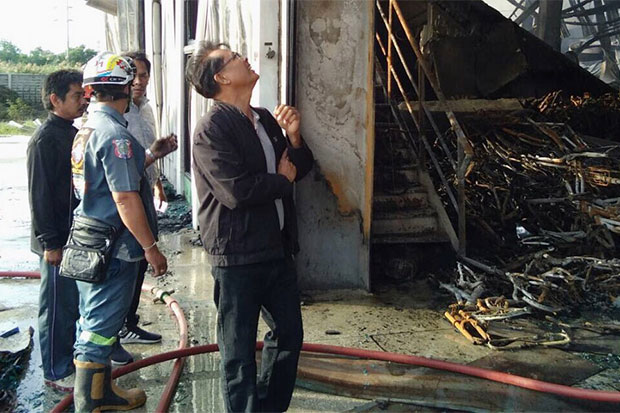