Deluge reaches 1-2m in some districts

Houses in tambon Ipan of Surat Thani's Phrasaeng district went right under after the Tapi River bank collapsed and the river overflowed. The Royal Irrigation Department says it will get worse and has alerted villagers in low-lying areas. (Photo by Supapong Chaolan)

Many communities in low-lying areas on both sides of the Trang River have been flooded, with some houses nearly submerged, after two riverbanks collapsed Sunday.

Dawn broke over Trang to see many parts of the town and its suburbs under water as high as 1-2 metres in Muang and Kantang districts.

That came after the two sites of river embankment collapsed the night before, causing water levels to rise up 30 centimetres right away. Residents have been told to prepare for a worsening of the flooding as the riverbank was weakening and a third site likely to collapse too.

Houses along the river were flooded, some even up to the rooftops. In Muang district alone, about 1,600 people have been evacuated. Villagers need to use boats to bring their belongings to camps set up for evacuees on the streets.

Mahamapheesakree Wamae, director of the Disaster Prevention and Mitigation Regional Centre 18, said water pumps were out on standby Sunday to drain water from flood-ravaged areas.

The pumping cannot start until the rain stops, however. 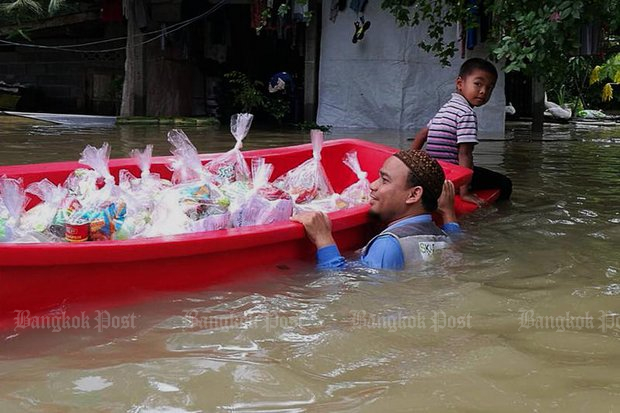 Conditions in Pattani were also dire, with chest-high water. A villager in the main town used a boat to carry food and other supplies. (Photo by Abdulloh Benjakat)

The situation in Pattani has improved. In Muang district, the water level in the Pattani River has been receding since Sunday. But the river runoff is still punitive. Measured at a level of 0.44 metres above the bank, the overflow is hitting nearby areas and communities. Since last Saturday, eight districts of Pattani have been hit by flooding which has killed two residents, injured two others and affected more than 30,000 villagers.

In Narathiwat, the flood situation has eased and water levels in the Sungai Kolok River have fallen after water was released to the sea in Tak Bai district. That helped to restore border trade between Thailand and Malaysia in Sungai Kolok district while passenger service boats are also back to operating as usual.

In Surat Thani, villagers were warned to brace for runoff from the Tapi River after the Royal Irrigation Department announced the water level will reach 0.84 metres above the bank in Phrasaeng district today and 1.30 metres in Khian Sa district on Thursday.

Meanwhile, the disaster prevention and mitigation department of Songkhla and the provincial irrigation office were using about 10 water pumps and eight water propulsion machines to drain water out of heavily-flooded Ranot district into the Gulf of Thailand. In Songkhla, flash floods from Sankalakiri mountain sent a tide of debris, rocks, trees and mud down to two communities in Saba Yoi district.

In Nakhon Si Thammarat, where 22 out of 23 districts were declared natural disaster areas, villagers resisted a plan by authorities to solve flood by building a series of dams on mountains and on high ground.

They proposed instead the construction of a kaem ling (monkey cheeks) water-detention ponds in low areas to address inundation, as they said runoff from the dams cannot be controlled and would worsen flooding.

The Meteorological Centre for the South's eastern coast said Sunday morning that rain would continue to hit Surat Thani, Nakhon Si Thammarat, Phatthalung, Songkhla, Pattani, Yala and Narathiwat during the next 24 hours.