Lao Ta Saenlee, 77, is brought to the Criminal Court in Bangkok to hear the judgement on Wednesday. He received life imprisonment.(Photo by Pattarapong Chatpattarasill)

The Criminal Court on Wednesday sentenced former Kuomintang fighter Lao Ta Saenlee, 77, to life imprisonment, and his son to death, for selling about 20 kilogrammes of crystal methamphetamine, or "ice", to undercover agents in Chiang Mai province last year.

Lao Ta and the four other defendants were arrested in a sting operation. Plainclothes police ordered the drug from them at Lao Ta's petrol station in tambon Tha Ton of Chiang Mai's Mae Ai district on Oct 11, 2016.

Public prosecutors arraigned the five people in December, on charges of drug trafficking between Sept 20 and Oct 11 last year.

The court was told a plainclothes policewoman who spoke Yunnan Chinese first contacted Lao Ta's drug broker and ordered a kilogramme of crystal meth. Lao Ta delivered it at his petrol station and his wife Asama, 67, received the agreed 550,000 baht in payment.

Police later placed a larger order, for 20kg, and were quoted 11 million baht. The arrest was made on Oct 11 during the delivery at the petrol station where Lao Ta, his family and associates were present. Police also seized military grade firearms and ammunition from them.

Rapeekan Saimul, the 58-year-old drug broker who told the court she had sold fertilizer, was sentenced to life imprisonment and fined 5 million baht.

Lao Ta's son Wicharn Saenlee, 42, who was a kamnan, and Baramee Barameekuakulsap, 39, denied the drug charge and claimed they were only supervising the petrol station. They were sentenced to death. Public prosecutors said they carried firearms and guarded the drug deal.

The all had been denied bail since their arrest. They said they would appeal.

Lao Ta was known formerly as an aide to the late drug kingpin Khun Sa. He has consistently denied being involved in heroin trafficking though admitting he used to trade in opium in the 1970s. 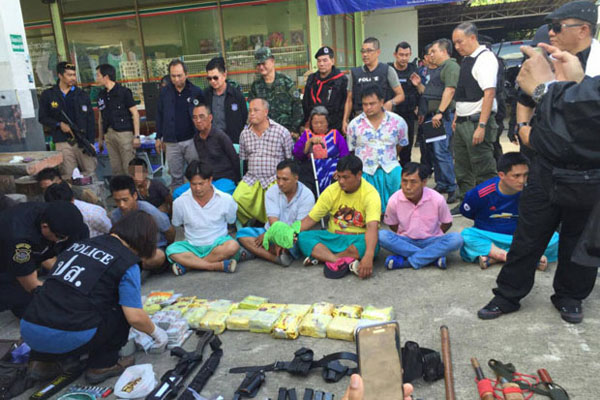 Lao Ta Saenlee (second row, wearing black) and his son Wicharn (second row, right), former kamnan of tambon Tha Ton in Chiang Mai's Mae Ai district, are arrested together with Lao Ta's wife and 14 aides during the police operation at the petrol station in Mae Ai in which 20kg of crystal methamphetamine and some weapons were seized on Oct 11, 2016. File photo: Royal Thai Army)