A medic and a police officer help South Korean tourist Hyong Soo-bae, who was injured in a fight with minibus operators on Sunday in Pattaya. (Photo by Chaiyot Pupattanapong)

CHON BURI: A tourist from South Korea sustained injuries in a fight with a group of minibus operators following a heated exchange of words early on Sunday, police said. Two men were later arrested and reportedly confessed to beating the tourist.

The incident occurred at about 4.30am at an intersection near Wat Chaimongkol temple in South Pattaya, tambon Nong Prue.

Tourist police who rushed to the scene on being informed of the incident found Hyon Soo-bae, 53, lying on the pavement, unable to move from an injury in the right leg. He was admitted to Pattaya Memorial Hospital.

A Thai woman accompanying the Korean said the incident occurred while they were returning to a hotel in a songthaew minibus. When told by a minibus conductor to move further inside, the Korean man said he would rather sit near the rear exit because his large stature would make it difficult for him to get off the vehicle. The two sides exchanged verbal abuse.

When the Korean man decided to get off to walk away, he was reportedly attacked by a group of minibus operators and a fight ensued. The tourist ended up lying on the footpath, while the attackers dispersed.

Police were checking the footage from security cameras in the area to help identify the attackers. They were later identified as Kosol Meekhai, 25, and Prasit Butrdee, 29, according to Pattaya police chief Pol Col Apichai Kroppetch.

They were later arrested and Pol Col Apichai said they had confessed to beating the tourist.

Mr Kosol claimed Mr Hyon initiated the fight after becoming enraged when asked to sit further inside the minibus to make room for other passengers. Mr Prasit joined him in the struggle with the Korean, he added.

The two apologised to the visitor during an interrogation at the Pattaya police station. 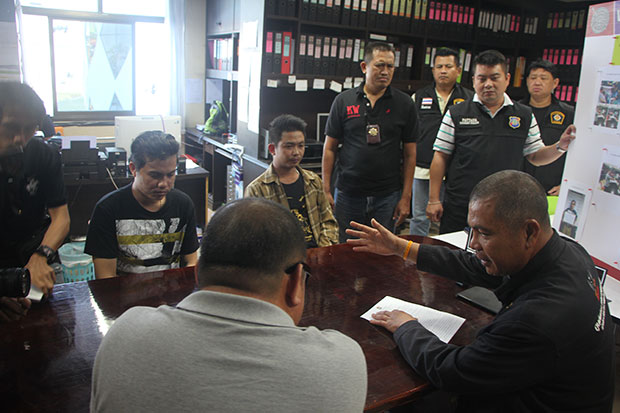